The Guardians: The Sandman and the War of Dreams and Masks

So here are my quick thoughts on the books i read the last couple of days:

The Sandman and the War of Dreams by William Joyce 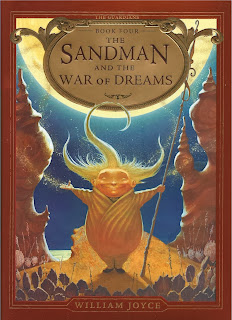 I love William Joyce’s Guardians of Childhood series. The picture books, the novels, the movie… they’re all a lot of fun. I’m sad that the movie—which is really good—didn’t seem to get much attention, and I’m sad that it appears that the next novel looks like it’s the last one. Still, they’re all quick enough reads that I can go back and read them all over again.

This latest novel brings the character of Sanderson Mansnoozie, the Sandman (geddit?) into the fray, after having had his origin told in a picture book. While each book in the series builds from the last, this one is very much an installment in a serialized tale. Following the capture of young Katherine in the previous volume, the Guardians search for their friend. Along the way, we learn more about the evil Pitch, his daughter, Mother Nature, and we see the Guardians begin to set things up for what may be the final battle.

As with previous books in the series, I really enjoy the mythology Joyce is building. It’s an epic adventure featuring Santa Claus, the Easter Bunny, and Mother Goose, but it neither feels silly nor overly serious. The books have the tone of an oral folktale, one that has been told again and again over generations. And yet, they also feel focused and detailed. While this time around, we don’t get too much insight into most of the characters, we do learn a great deal about Pitch, Sandman, and Nightlight.

Unfortunately, it felt as if this volume had fewer illustrations than previous ones. I really enjoy Joyce’s artwork, so that was a shame. Also, this feels less like a complete installment than setup for what will come next. Having said that, the background information this book provides more than makes up for that. And since I am totally enjoying the series as a whole, I’m okay with installments that expect me to read what came before and what will come next. 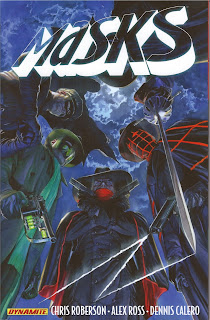 I also read Masks, the collection of the Dynamite comics series bringing together a ton of pulp heroes, including the Shadow, the Green Hornet, the Spider, Miss Fury, the Black Terror, and many others. The story, by Chris Roberson, gives us the state of New York under the grip of the fascist Justice Party. This is a corrupt political party, essentially run by gangsters, meting out terror and oppression under the name of the law. The notion that a state government could be so easily subverted, and the streets of New York start being patrolled by an army of masked, armored thugs feels very pulpy, in the spirit of the characters it teams up.

Unfortunately, the story ultimately feels so busy and crowded that nobody really gets much of a chance to do anything. The Shadow gets his best lines, with his “Why don’t you all quit screwing around,” attitude. Others, like Miss Fury and the Green Lama, end up making token appearances. We get the origins of the Black Bat and a new Zorro, but ultimately, their roles could have been played by anybody, and that makes the story feel kind of pointless.

For that matter, the revelation of the villain behind everything, and his motivation, seems very perfunctory and rushed. It’s a character we’re supposed to know, but we never see him out of the context of being a villain. He ascribes more complex motivations for his plan than we see on the surface, but it’s difficult to believe him when we only ever see him doing anything besides masterminding this fascist organization. Also, things get wrapped up so easily it’s hard to imagine how they got so bad in the first place.

Fortunately, it’s got great art by Alex Ross on the first chapter, and Dennis Calero through the rest of the book. While I hadn’t thought of Calero’s pen-and-ink work with its heavy use of shadow as particularly similar to Alex Ross’s painted pages, they share a lot in terms of layout and character acting. So the whole thing feels like a cohesive whole, despite what, on the surface, are two very similar styles.

As a huge fan of the Shadow, it’s hard for me to pass up any story featuring him. And this is a very pretty one, but also very slight.
Posted by Penelopecat at 3:54 PM
Email ThisBlogThis!Share to TwitterShare to FacebookShare to Pinterest
Labels: books, comics