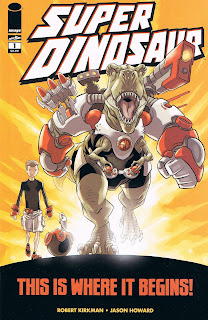 The last couple of weeks, I was starting to feel a little frustrated with comics. Well, DC comics, to be exact. Well, Geoff Johns taking an entire year to bring back Alan Moore’s version of Swamp Thing, to be exact. Well, that, and me ordering the first issue of a Flashpoint miniseries because it was drawn by George Perez, only to find out that George Perez isn’t able to draw all three issues of the series, which I was only ordering for his art.

But, you know, there’s still plenty of stuff to be excited about in comics, and that’s what I’m choosing to focus on instead.

First, while the (hopefully) first wonderful series of Marineman is drawing to a close, I’ve found another potentially fantastic series to look forward to. Robert Kirkman, champion of creator-owned comics, has just released Super Dinosaur, created with his artist from Astounding Wolf-Man, Jason Howard. And they’ve done a great job. 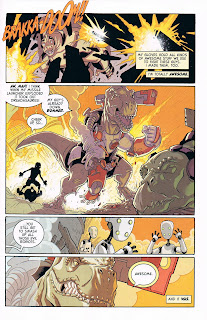 Super Dinosaur feels like the best sort of classic children’s entertainment, by which I mean that readers of any age will find something to enjoy in it. They’ve included a lot of elements of the classic boy genius/adventurer genre, but melded it with so many other things that it’s much, much more than a thinly disguised take on Jonny Quest or Tom Swift. There’s big explodey action and heart-rending quiet character moments. And, you know, dinosaurs.

It took me some time to come around, but I’ve become a fan of pretty much everything Kirkman writes these days. And this book is no exception. Jason Howard, back coloring his own work again, also beautifully draws it. This looks like the start of something truly entertaining, and I hope it finds its audience.

That’s always going to be the hard bit for comics trying to reach out to kids, of course. They’re sold in comics shops, and if kids aren’t reading comics, they’re not going to come into a comics shop in the first place to find some, no matter how perfect something like Super Dinosaur may be for them. And regular bookstores just pile them all into one catch-all graphic novel section. So maybe the best thing the industry can try to do is to produce the comics for the aging comics-shop audience, in hopes that the 30 and 40-year old dads will purchase them for their kids. 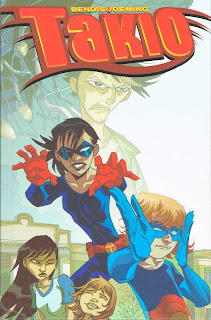 Certainly, if I were an adult fan of Invincible and Walking Dead, and wanted to share my love of Robert Kirkman’s books with my kid, I’d purchase Super Dinosaur to read with them. Similarly, fans of Brian Bendis and Michael Avon Oeming’s Powers ought to pick up Takio for their kids. (Same great writing and art, characters young readers can identify with, and a lot less swearing.)

And fans who want to introduce their kids to mainstream superheroes should really be able to share the regular Marvel and DC comics with their kids. And the idea that they can’t is partly a problem with the publishers, and partly a problem with the readers. Because, seriously, if you are young enough to have kids who are just now old enough to read superhero comics, you probably haven’t been reading Green Lantern or the Flash or Spider-Man since the very beginning yourself. At this point, the majority of superhero readers joined whatever comics they’re reading somewhere in the middle of the run, and had to figure out stuff on the fly. But, somehow, we seem to have lost sight of this, and now proclaim today’s comics as “inaccessible.” And while they can be pretty impenetrable at times, I think we’re not giving new readers (of any age) enough credit if we think they won’t be able to figure stuff out. And maybe giving current Marvel and DC comics too much credit if we think they’re too complicated to figure out.

And, really, if a regular issue of Amazing Spider-Man or Batman or Thor is too mature for middle-school kids to read, what the hell is happening in the pages of those comics? And how true to the original creators' intentions could that possibly be?

Anyway, enough of that. I also just finished reading a book I have been waiting almost my entire life for, it turns out: Genius, Isolated: The Life and Art of Alex Toth. (I can’t post any scans from the book, because it’s literally too big and heavy to put on my scanner.)

I can’t actually remember the first time I knew I was reading an Alex Toth story. I know I read a Black Canary two-part story he did, and I knew he drew a Challengers of the Unknown series in Adventure Comics Digest. And he did a Superman Annual that I would love to read again.

Once I connected his name to his art, I knew that he was one of my favorite artists. I’m no artist, so I can’t tell you how his art works. But I loved his clear, bold, minimalist style, telling the sorts of adventure stories I loved clearly and beautifully. My admiration of his work probably paved the way for me loving the artists who influenced him (first Milton Caniff, although I didn’t know it at the time, then Frank Robbins, Noel Sickles, and many others), as well as those influenced by him (Steve Rude, Randy Reynaldo, just to name two).

My earliest introduction to superheroes was probably the first season of the Superfriends cartoon. Years later, I learned that he was the designer for that series, which makes him responsible for my getting interested in comics in the first place. However, after reading this book, I learned that I’ve been a fan much longer than I thought.

When I was a kid, my dad would take periodic trips, to conferences, or to visit his ailing parents, or who knows what other reasons. I was a kid. Anyway, at the time (the early 70s), because he wasn’t a big fan of flying, and he was a big fan of trains, my dad was just as likely to take the train as he was to fly somewhere. Maybe it was cheaper, too, for all I know.

Anyway, one time, my mom and I went to the train station to pick him up from one of his trips. I can’t remember the circumstances, but I was allowed to pick a comic book from the station newsstand to read while we were waiting. Even at that early age, I was reading comics, but mostly Harvey and Disney humor comics. This time, however, I picked a comic telling the story of Paul Revere’s ride.

This realistic, historical comic may seem like a departure from what was then my usual fare, but one of my dad’s hobbies at the time was building detailed paper models (from kits) of historical buildings. One was the Old North Church in Boston, and he had explained to me the role that the church had in the story of Paul Revere’s midnight ride. That story had fascinated me, and seeing it told in comics form, I probably was motivated to read it to learn the whole thing.

I loved the comic, but only after reading Genius, Isolated, did I learn that it was drawn by Alex Toth. I’ve found the whole thing online here, and it totally holds up to my memories. So it’s entirely possible that Alex Toth drew the first ever serious adventure comic that I read, just as it just so happened that my first ever Batman comic was also the first one drawn by Marshall Rogers.

Alex Toth is a name most comics fans (hopefully) know today, and this book shows why that should be the case. Reproduced wherever possible from his original art, the book demonstrates Toth’s skills as a storyteller. Arguably, the scripts he worked from aren’t as groundbreaking as the art, but there’s not a single story I had to struggle through. Ironically, the clunkiest writing is Toth’s own, in the strip Jon Fury, which he did for an army newspaper. You can see a talented storyteller struggling to master unfamiliar skills, with word balloons almost crowding out the artwork with stilted, wooden dialogue. If Toth had given himself the opportunity to practice and develop his writing skills as much as he did his art, he could have become an even more influential creator.

Genius, Isolated, the first of three volumes, is fantastic, and not just because it’s full of comic book art drawn by Alex Toth. (Although, to be fair, that would be enough to make any book fantastic.) It’s also a great biography, giving a great sense of the man behind the art. It not only tells Toth’s story, but the story of the comics industry as it was developing at the time. But it’s also fantastic for me because it helped me reconnect with a part of my past, when buying new comics was still a revelation, not just something I did every week.
Posted by Penelopecat at 4:17 PM No comments:
Email ThisBlogThis!Share to TwitterShare to FacebookShare to Pinterest
Newer Posts Older Posts Home
Subscribe to: Posts (Atom)