The Disneyland Story: The Unofficial Guide to the Evolution of Walt Disney's Dream by Sam Gennawey 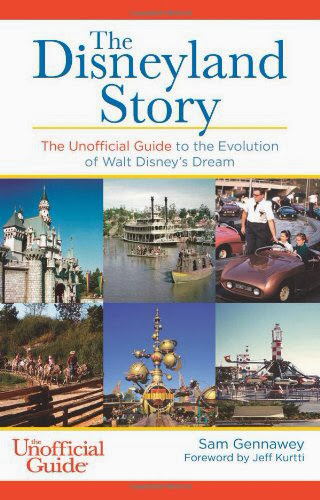 Disneyland is one of my favorite places, and I've been visiting it for years. I know a lot about the park, but I haven't been obsessive about how things have changed and developed over the years. I also don't know that much about its history, beyond what I've seen in various TV specials, at the park, and at the Walt Disney Family Museum. I recently decided I wanted to learn more about Disneyland, but found there weren't a whole lot of comprehensive histories of the park. Fortunately, one was due to come out, and I purchased it as soon as it was released: The Disneyland Story, by Sam Gennawey.

Gennawey tells the entire history of Disneyland, from its earliest conception in the mind of Walt Disney, all the way up to 2012. The book shows the obsession to detail of a true fan, but Gennawey presents his history objectively, without judgment. This doesn't read like an Internet obsessive's guide to the good old days followed by where things went wrong. Instead, we get a true sense of how the park has always been a growing, evolving thing. There were attractions that Walt Disney championed at opening day that failed to catch the public's imagination. There are more recent additions, created long after Walt's passing, that because hugely popular. Gennawey treats all those stories equally.

While he doesn't seem to have an ax to grind as far as favoring nostalgia over innovation and change, he doesn't shy away from problems, either. This is particularly evident in the details of the park's ongoing negotiations with the City of Anaheim and its residents, trying to work out the best deal for a business that has tremendous impact on the community around it. As a Disney fan, I was more interested in the history of the park, but Gennawey keeps the politics to a minimum, getting the important information across without getting caught up in dry minutae.

Overall, this sums up the approach to the book: we get a timeline for new attractions opening, and details about them as they open, but things are kept brief enough that the story keeps moving along. If the book is lacking in anything, it is in illustrations, presumably due to this being an unofficial publication. However, Gennawey creates enough images through his prose that we can almost see the park in the eyes of our minds.

Fans looking for a guidebook to Disneyland will be better off with other publications, as will fans looking for an opinionated document written to advance a specific point of view. What readers will find here is an interesting recounting of the development of what has become, for many visitors, a magical place. He doesn't skimp on the park's successes, and it's fascinating to see how a place that means so much to so many people developed the way most businesses do, driven by ordinary men. A definite must-read for people who want to see the evolution of Disneyland over the decades.

Posted with Blogsy
Posted by Penelopecat at 3:50 PM No comments:
Email ThisBlogThis!Share to TwitterShare to FacebookShare to Pinterest

The Desperate Adventures of Zeno and Alya by Jane Kelley 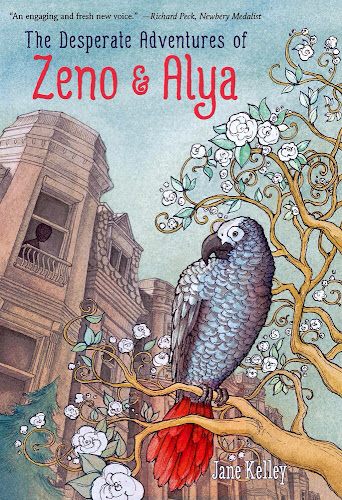 Thanks to the little Senegal parrot living in our house, I've become a big parrot fan. So this story, about Zeno, an African Grey parrot who loses his owner--not that he'd ever admit to being owned--and Alya, a young girl suffering from leukemia, caught my attention. I didn't expect it to be a happy story, and indeed, I found myself in tears over and over again. But I still loved it.

More than anything else, this is a story of frustration, and Jane Kelley communicates that very well. Zeno, like all African Grey parrots, is highly intelligent, but he isn't a human. His concerns are those of a bird, and while he has a highly developed English vocabulary, he finds himself alternately unable to communicate what he really wants to the humans, or finds humans unable to understand that he is really trying to speak to them, raither than just imitate sounds.

Alya, on the other hand, is frustrated with her declining condition. She can no longer do the things she took for granted, and she feels like she is losing her friends and family as a result. They're still there, but they treat her differently. Kelley effectively shows how both Zeno and Alya perceive this loss of control, and how it upsets their lives.

This isn't a typical kid-animal bonding story, and it lacks a lot of the heartwarming moments you'd expect from that sentimental genre. It's tough and hard-edged, and there are a lot of harrowing sequences. I found myself particularly upset at one character, a woman who takes Zeno home, but is more interested in how he fits into the decor of her house than his well-being as a living, thinking creature. I know that there are far too many people like that out there, who don't understand the responsibilities of bringing an animal into their home. There's too great a perception that because animals don't speak a language that we recognize, they are somehow inferior to humans. As if the ability to smoke and kill each other over religion is an indication of superiority.

Ultimately, this is a tough book for me to pigeonhole (pun intended). It's so well written, and so tugs at the heartstrings, that I recommend it for its sheer quality. But it's also very upsetting through most of it, so definitely not a light distraction. I loved it, but I don't think I need to revisit it again for a while.