As a kid, I loved the Rocketeer. The creation of the taken-too-soon Dave Stevens, the 1930s hero first appeared in comics a few months after I entered comics fandom myself. Only a relatively few stories appeared over the next decade or so, but I eagerly devoured every one. And when the movie came out in 1991, I was in heaven. Last weekend, a number of things led to me wanting to watch the movie again, and that led to me rereading the comics. I’m pleased to say they all held up exactly as I remembered them.

The comic came out at the perfect time in my life. I had just started reading comics seriously. The cover of Captain Carrot and his Amazing Zoo Crew #1 had gotten me into the comics store, but it was the explosion of new publishers and series in the early 80s that kept me there. Pacific Comics had just debuted Captain Victory #1 about that same time, which was not only my introduction to Jack Kirby, but to color comics published by companies other than Marvel or DC. Pacific followed that up with Mike Grell’s Starslayer, and at the back of Starslayer #1 was an ad for a new backup series debuting in Starslayer #2: the Rocketeer. 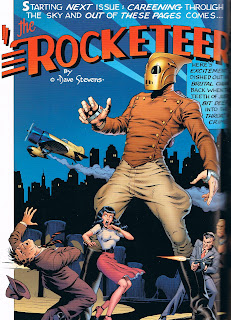 The year before, Raiders of the Lost Ark had made me a fan of period adventure stories. The image of the Rocketeer, with his distinctive helmet, looming over a gun battle between some ‘30s looking gangsters with a beautiful woman (what did my 12-year-old self know from Bettie Page?) looking on in horror, completely captivated me and who knows how many other comics readers? All I know is that when Starslayer #2 came out, I was as eager to read that backup story as I was the main one.

And it lived totally up to those expectations. Writing about this now, almost 30 years later, it’s hard to remember exactly what appealed to me at the time. Part of it, I’m sure, was the art, with Stevens’ loving attention to period detail. For someone who, at that point, had only been reading either humor comics or superhero comics set in the contemporary world, this felt like the closest I’d ever get to reading a “new” story from what was already becoming apparent to me was the Golden Age of heroic fiction.

Plus, Stevens had a genuine knack at creating compelling characters I wanted to learn more about. This was quite possibly the first time I’d been in on the ground floor for a superhero’s origin, and in the character of Cliff Secord, Stevens created a winner by creating a loser. He wasn’t a guy who wanted to be a hero. He just wanted to make a buck. But by the end of that first story, when his friend was in trouble, Cliff stepped up and flew off to the rescue. 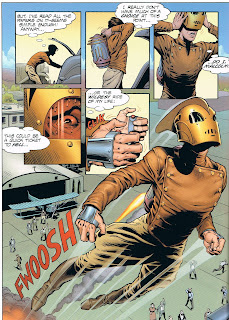 From that point on? Totally hooked. Couldn’t wait for the next installment.

Ironically, it turned out that waiting for the next installment became the primary occupation for Rocketeer fans. Dave Stevens soon earned a reputation for being an extremely slow, meticulous artist, and Rocketeer stories were few and far between. That first story appeared in four short installments from Pacific Comics, but before it could be finished, Pacific went out of business. Eclipse Comics published the conclusion before compiling the whole thing into a graphic novel, but according to Stevens’ autobiography, Brush with Passion, an acrimonious relationship with Eclipse kept him from doing further stories with them.

In the late 80s, I was overjoyed when Stevens produced two installments of the Rocketeer Adventure Magazine for Comico before they went out of business. The third installment of that series finally came out in 1995 from Dark Horse Comics. They are still in business, but that was the last appearance of the Rocketeer in print. 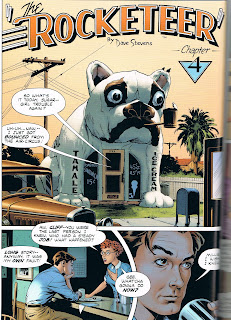 According to Stevens, it had just been too long between installments, and the comics industry was in trouble in the mid 90s. The sales just weren’t there to support new stories. Later, Stevens had talked to DC Comics about a comic teaming up the Rocketeer with the Golden Age Superman, but that never came to fruition due to differences between Stevens and DC. Which is really a shame.

Of course, in between the Comico and Dark Horse issues came possibly the greatest single Rocketeer story of all: the full-length movie adaptation from Walt Disney Pictures. I’ve always taken a “I’ll believe it when I see it” attitude towards movie adaptations of my favorite stories, but when this one actually came out in theaters, I was there opening day. (Possibly even for a special preview screening; the memory fails me.) 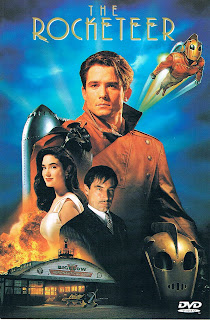 I was so excited when I saw the commercials, because they looked just like the comic I loved had come to life on the screen. I felt sure it would be faithful to Stevens’ comic; he had liked the screenplay so much he had the screenwriters help write the second Rocketeer story for Comico. I remember asking to leave work early, so the show wouldn’t be sold out before I got there.

I didn’t need to worry. I think there was maybe one other person in the theater. Although it had been getting great reviews, the movie bombed at the box office. I was heartbroken, because it meant there wouldn’t be sequels. But regardless of how it did, that didn’t change how good it was, or how much I loved it. To this day, it remains one of my favorite movies of all time.

A couple of weeks ago, we were in Disneyland, where they play the Rocketeer theme as part of the background music at Disney’s California Adventure. I saw the trailer for the Captain America movie, set in WWII and directed by Rocketeer director Joe Johnston. And IDW solicited the first issue of a new Rocketeer miniseries, with new stories by big-name comics creators. I had the Rocketeer on the brain, and wanted to watch the movie again.

My wife watched it with me, and she loved it too. Her first comment after it ended was, “Why isn’t there more Rocketeer stuff in California Adventure?” She couldn’t believe that the movie, with its perfect mix of action and humor, with a believable historical setting and three-dimensional, down-to-earth characters, wasn’t a bigger hit. I don’t get it either, but there you go. 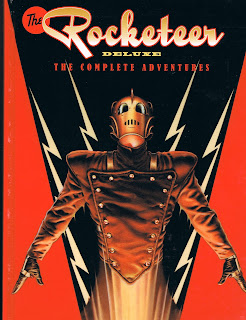 After watching the movie, I reread the comics, finally available in a gorgeous new edition from the aforementioned IDW, after decades of being criminally out of print. And they held up every bit as well as I remembered. The stories are still fairly simple and straightforward, but the characters are compelling and the art is beautiful.

I look forward to the new miniseries with somewhat mixed feelings. I’m excited that we’re finally getting new Rocketeer stories that I haven’t read, but sad that this never happened while Dave Stevens was alive. I also understand that, obviously, this is the only way we’ll ever get new Rocketeer stories. Knowing that he had help writing and drawing the original stories, I’m okay with the idea of other people working on the character. (He says this should have been his original plan anyway.)

It’ll be weird, seeing the characters in other people’s styles, but because the character is so identified with Dave Stevens, I doubt we’ll see them taken in wildly inappropriate directions. By all accounts, Stevens was well-respected, both for his talent and for being a genuinely nice guy, so I expect these stories to be respectful homages. I’m really excited to see the comics, but it’ll be bittersweet.

A few years ago, when DC and Marvel were going through periods where major series (Infinite Crisis, Civil War, Action Comics, Wonder Woman) were experiencing huge delays due to slow artists. At the time, the companies pointed out that plenty of classic comics, like Watchmen, Camelot 3000, and, of course, the Rocketeer, suffered huge delays when initially serialized. Ultimately, the delays were forgotten by history if the quality of the finished story was good.

Clearly, the eventual loss of sales for the Rocketeer can be traced back to the infrequency of stories. Even Stevens says so. So that’s not a particularly good argument. More importantly, I think great work is worth waiting for if it’s the product of a personal vision. There’s nothing so momentous about a Spider-Man or Batman story that justifies making the reader wait for it. 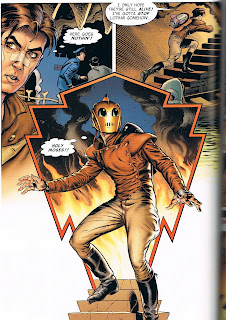 But comics like the Rocketeer are different. You can feel the love Stevens pours into every single line, and that’s why the series (a mere 130 pages or so, maybe the equivalent of six or seven full-length comic books) is still regarded as a classic today. I waited patiently for each installment, and rejoiced when each one came out. Hopefully, the new stories will feature the same amount of love, and while Stevens can’t be with us to supervise these new stories, I’m sure the creators know that he’s still looking over their shoulders.
Posted by Penelopecat at 6:48 PM No comments:
Email ThisBlogThis!Share to TwitterShare to FacebookShare to Pinterest
Newer Posts Older Posts Home
Subscribe to: Posts (Atom)