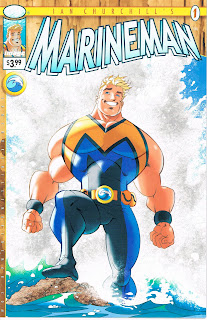 While superheroes are still the primary genre for American comics, they come in a couple different flavors. To my mind, the biggest division is between company-owned (like Superman, Batman, and Spider-Man) and creator-owned (like Invincible, Spawn, and Dynamo 5). While I still enjoy reading the adventures of my childhood favorites, like Superman and Batman, these days, I am increasingly drawn to the creator-owned books. A new favorite is Ian Churchill’s Marineman.

The first issue of Marineman introduces us to Steve Ocean, a marine biologist, host of his own TV series, and a bit reminiscent of another hero of mine, Crocodile Hunter Steve Irwin. In this issue’s afterward, Ian Churchill professes his passion for marine biology, and between the detailed information about free diving, shark biology, and the marine biologist profile pages at the end of the book, it seems clear that real marine science will play heavily into the story. (At least, that’s my hope. It seems more likely than, say, the pages of Michael Turner’s Fathom, which was pretty definitely fantasy-based from the get-go.) 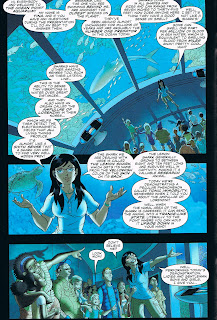 We also meet Steve’s friends/coworkers and father, who works for the US Navy in a so-far-undisclosed capacity. He works in a secret base and wears a lab coat, so I’m guessing military scientist. He also apparently frequently asks his son for favors, so I’m guessing that helps Steve get involved in adventures.

Finally, the issue sets up a couple of mysteries. It starts off with the death(?) of a free diver after observing a mysterious flash of light underwater. There’s also mention of a mysterious figure saving shipwrecked oilrig workers. Presumably, the source of the mysterious light, and the death of the diver, will be the central plot of this first Marineman story.

If there’s one problem I have with this issue, it’s that it feels a little incomplete, like it’s really just half of a first issue. Some mysteries are set up, but there’s nothing to immediately connect Steve to them. And the surprise cliffhanger is really pretty weak. However, between the premise, the writing and the art, there’s more than enough to bring me back for the next issue.

I first became familiar with Ian Churchill’s name from his work at Rob Liefeld’s Maximum Comics, I think, so I always sort of associated him with that style in my mind. Later, I became a fan from his work on Uncanny X-Men and Supergirl, but more often than not, he tended to work on series that I wasn’t particularly interested in. So I’m glad to see him working on his own characters here. I’m more glad that they’re the sort of characters and story that I like. I’m most glad that it’s a great comic.

In Churchill’s back-page essay about the creation of Marineman, he talks about his love for the “bright shiny superheroes [he] loved as a kid,” and a fellow pro’s suggestion that he “do a creator-owned comic that made [him] feel the way those old comics made [him] feel.” That, I think, really shows the advantage of someone creating his or her own comic rather than working on a company-owned character.

There are plenty of Marvel and DC characters I loved in my youth. But their stories aren’t being told by the same people, or in the same way. It’s not as simple as “They’re not as good as they used to be.” (There’s a future blog entry coming out of this.) Even if Ian Churchill had been, say, a huge fan of Teen Titans or Superman or Captain Marvel as a kid, there’s almost no chance that he’d be able to go onto one of those books and tell the same kinds of stories he used to love. But with Marineman, he can do exactly the sort of book he wants.

I can understand a relatively new comics creator wanting to work on a company-owned character. For one thing, they probably grew up reading company-owned characters, and there’s something cool about being a part of something you loved as a kid. Plus, when you’re new in comics, it’s easier to attach yourself to a known commodity, if you’re not one yourself.

I also get that folks for whom comics are just a side project might just want to do stories about their favorite characters. If your day job is writing TV shows or movies or novels, there may not be the same impetus to create even more new stories in the comics medium. Especially since it’s not a medium that’s particularly welcoming to new stories and it may not be something they can devote themselves to full-time.

However, if you’re a full-time comics creator, and you’ve made a name for yourself, I would imagine it would feel pretty limiting only working on other folk’s characters and concepts. I get that it’s a tough market that isn’t welcoming to new characters, and it would probably be a lot safer for someone like Ian Churchill to work on the Hulk than Marineman. But no matter how good a job someone does on someone else’s characters, no matter what they add to the mythology, it’ll never be something that can completely be identified with them. They’ll always be building on what others did before, and their work will always be followed by somebody else building on theirs. 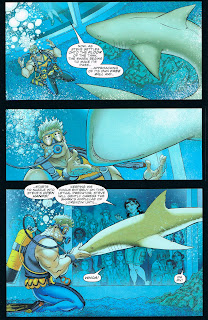 With Marineman, I know I’m getting exactly the book that Ian Churchill wants me to see. I’m not going to be suddenly disappointed when another writer or artist arbitrarily replaces him. I’m not going to feel like his story has been sidetracked by some greater editorial need for the company as a whole. Nobody is going to come to him with the order, “Less fish, more aliens.”

So I’m pleased to see a creator like Ian Churchill take the risk to tell his own story. I hope it’s as satisfying for him as a creator as it is for me as a reader. As I said, it’s a tough market for new comics, so I’m trying to do my part to spread the word. This is a comic that deserves to be read, and I hope it runs for years.
Posted by Penelopecat at 5:01 PM No comments:
Email ThisBlogThis!Share to TwitterShare to FacebookShare to Pinterest
Newer Posts Older Posts Home
Subscribe to: Posts (Atom)