So last weekend, we were in Disneyland for the wife’s birthday, so no blog entry. This week, something different from the single-topic essays I’ve been doing. I’ve been trying to get through my backlog of graphic novels, so instead of writing a big entry about each one, I’ll just share some brief(er) thoughts. 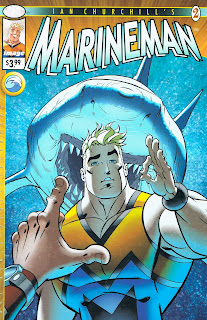 Before we get into those, though, I want to mention that I read Marineman #2. All the good stuff I said about the first issue still holds true, plus having now seen Steve “Marineman” Ocean in action, I think I have an even better idea of the overall tone and feel of the series. Comics readers looking for a new superhero series with some heart and a genuine point of view should really be taking a look at this. 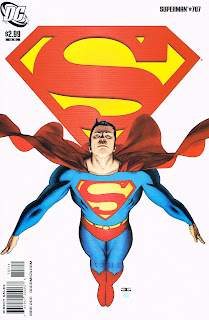 On the flip side, with Superman #707, I think I may be done with this particular series. Not Superman the character (still planning on sticking with Paul Cornell’s Action Comics) but Superman the monthly comic.

It’s not because of the controversial “Superman walks across America to get in touch with ordinary folks story,” which I was enjoying. But in this issue, he encounters a factory that is polluting the environment, bribing the EPA to pass inspections rather than bring themselves up to code. Superman is told it would be too expensive to bring the factory up to code, and the town can’t afford the loss of jobs if the factory were to close because it wasn’t profitable enough. And Superman refuses to take a position on the issue because it’s too complicated and he can’t make up his mind about what is the right thing to do. Plus, he tells Lois not to report on the story because it’ll hurt the townsfolks’ lives.

So, here’s the thing. Day in and day out, I encounter complicated, difficult issues without clear answers. We all do. Superman is supposed to be able to cut through the confusion and find a solution. And he’s supposed to do the right thing, even when it’s hard. That’s what makes him a hero. And his apparent inability to do so in this case makes him completely not the kind of Superman I want to read about. (In general, it’s the Super part that makes his stories distinctive. If they just want to focus on the Man part, I can get that anywhere.)

So, since I’m trying to cut back on comics anyway, I think I’m out.

Anyway, on to the graphic novels: 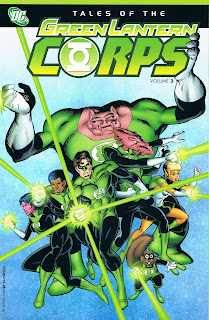 Written by Steve Englehart, drawn by Joe Staton and Mark Farmer, this was a personal favorite of mine from the 1980s. I loved them as much now as I did then. At the time, it seemed to represent a genuine change in the series, going from the solo adventures of Hal Jordan (Green Lantern and star of the book since 1959) to a team book, featuring not only human or humanoid characters, but also some genuinely alien aliens. Steve Englehart wrote compelling, soulful characters with distinct, full personalities, and Joe Staton illustrated them beautifully. (On a side note, I’m very pleased to hear that Joe Staton will be taking over the art on the Dick Tracy comic strip, and that Dick Locher is retiring as writer.)

Of course, nothing ever lasts in company-owned superhero comics, and it wasn’t but a couple of years later that DC decided to return to the single-hero format, and to fold Green Lantern into their new Action Comics Weekly title. As I understand it, Englehart and Staton weren’t interested in doing that, so they left, and the gradual decline of Green Lantern as a comic started (arguably), only to be arrested (arguably) when Geoff Johns took over the franchise.

The thing is, though, rereading this book really highlighted the differences between the comics I loved as a kid, and the way those comics are being done now. The Green Lantern comics are being written and drawn just fine these days, but I’ve been feeling a growing sense of dissatisfaction with them for a while now. And now, rereading the stories that I loved, I realize why.

I can’t remember the last time we saw the characters just taking a break and doing something human, like relaxing or drinking coffee or just talking. For that matter, I can’t remember the last time Hal Jordan took his mask off. I think there’s a future blog entry in this, so I’m not going to go on about it too long, but as good as the stories are today, they don’t seem to be the stories I’m interested in reading about these characters. I liked the sorts of stories Englehart and Staton and their contemporaries were telling when I was a kid, and I think I’d rather reread those than read what’s going on now.

I was also struck by how all-ages appropriate the Englehart/Staton stories were. They felt like they were written for the same audience that Marvel and DC’s “kids line” comics are written for. That’s a good thing, because when the Green Lantern movie comes out this summer, kids are going to be asking for Green Lantern comics to read. I’m glad that I’ll be able to give this to the younger readers without worrying about it being too mature. 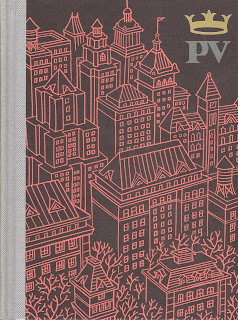 This is the first hardcover book format issue of Seth’s comic book. In the introduction, he acknowledges that the alternative comics market is much more receptive to self-contained books than ongoing 32-page comics periodicals. This is something of a hybrid, containing the latest installment of his serialized graphic novel, Clyde Fans, as well as self-contained comics stories and a prose article.

Clyde Fans, by its nature of being a quiet, leisurely-paced narrative about two brothers trying to keep their family business afloat, works okay as a self-contained chapter. While definitely part of the larger narrative, it also works as a short story about one of the brothers making an important decision. And, of course, it’s beautifully illustrated.

The other comics story, an autobiographical sketch of Seth on a trip feeling self-conscious, is just fine. The art is beautiful, and Seth manages to perfectly capture the melancholy tone of ordinary life, with which I totally identify. I also really enjoyed his sketchbook pages.

My favorite bit, however, was his article about the model cardboard city he is building as a hobby. Originally, he planned on creating a graphic novel about five characters, united only by the fact they lived in the same city. As he built up the details of the city, he discovered he found that more fascinating than the stories he had planned to tell in it. He went from sketchbooks filled with details about the city’s history and businesses to building cardboard models of the place. He’s even exhibited his models in art galleries.

As someone who loves coming up with and exploring detailed environments for stories, I found the article fascinating. As a kid, I used to buy books of build-your-own paper models of places like the Emerald City of Oz or the Gaulish village of Asterix and Obelix. My dad used to build detailed paper models of historical buildings like the White House or Mount Vernon or Philadelphia’s Independence Hall. Had I nurtured those creative impulses into adulthood, I’m sure I’d be doing the same thing Seth is now. And I’m a little sad that I’m not. 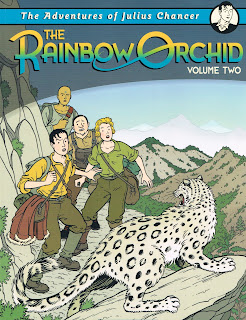 This is the second installment in Garen Ewing’s Adventures of Julius Chancer, a new graphic novel series very much influenced by the Eurpoean ligne claire style, as popularized by artists like Tintin’s Herge. (Also very reminiscent of the Uncle Scrooge stories of Carl Barks and Don Rosa, only with humans.) I love those stories, and there’s not enough people doing that sort of work now, so I’m happy to read these. 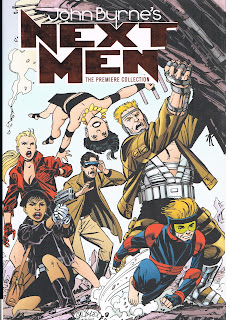 This will probably be getting a longer blog entry sometime soon, but now that John Byrne is finally returning to his Next Men series, I wanted to reread the first part of the story. Like the Englehart/Staton Green Lantern Corps stories, this is totally living up to my memories. Much more of a science-fiction series than a superhero book, it’s clear that Byrne put a lot of thought into developing this series. The story is fun and exciting and the art is gorgeous. Definitely looking forward to continuing to reread the earlier chapters, and the new issues now coming out every month. 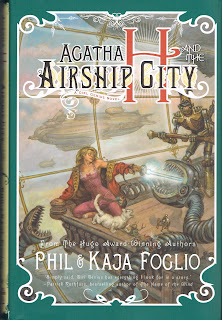 Finally, I also finished a prose novel, Agatha H. and the Airship City, by Phil and Kaja Foglio. It’s based on their webcomic/graphic novel series, Girl Genius. I had read the early issues of Girl Genius when it was a print comic, and have been reading the more recent installments on the web comic. However, I haven’t gone back to read the whole comic series online, so a lot of this novel was new to me.

I’ve been a fan of Phil Foglio since he adapted Robert Asprin’s MythAdventures to comics in the 1980s. I love his artwork, and think his writing is hilarious. He’s just as funny in prose, which is what sets this book apart from other steampunk novels. Plus the characters are entertaining, and he sets up some intriguing mysteries in what seems to be the first volume of the series.

My big problem is that it reads very much like a first installment rather than a complete novel in its own right. I’m sure there are future novels planned (this one sold out almost immediately) and I can always read the comics. I just wish I had gotten a greater sense of closure from this book.

And that’s it for now. Wife is baking whoopee pies downstairs, so it’s time I stopped wasting time up here typing.
Posted by Penelopecat at 3:34 PM No comments:
Email ThisBlogThis!Share to TwitterShare to FacebookShare to Pinterest
Newer Posts Older Posts Home
Subscribe to: Posts (Atom)