SFX - Star Trekking - with JJ Abrams: "JJ Abrams is directing the next Star Trek film. Just take a moment to digest that. Check the calendar -- no, it's not April 1st. The source? Paramount itself."
Posted by Penelopecat at 7:39 PM No comments:
Email ThisBlogThis!Share to TwitterShare to FacebookShare to Pinterest 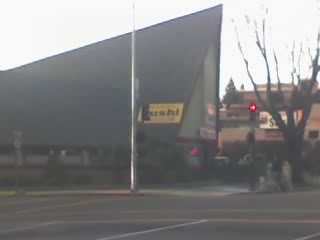 Back in California the ratty neighborhood where i used to work has been urban renewed. This sushi place used to be a Der Weinerschnitzel.

Posted by Penelopecat at 2:39 PM No comments:
Email ThisBlogThis!Share to TwitterShare to FacebookShare to Pinterest

As time passes, disappointments and frustrations continue to dominate this year. This past week hasn’t involved either me or any members of my family ending up in the hospital, which is a pleasant change, but now it’s looking like my father is going to need surgery, which makes my own problems feel petty and small by comparison. (But they’re still there, nonetheless.)

First, of course, I loved the new episode, New Earth. Funny and scary, touching and thrilling, it builds on the success of the first season in a spectacular fashion. It’s not perfect; the actual resolution to the story is a little quick and easy, and as a result, not entirely satisfying. But the rest of it is so solidly entertaining, I don’t really mind.

(I should point out, at this point, I’ve seen the episode three times. Twice just to watch it, and once with the commentary downloaded from the official web site.)

New Doctor David Tennant, in just two episodes, has succeeded in making the part his own. And Billie Piper continues to be a treasure, both as Rose, and as Cassandra, the Last Human, who returns in this episode with a twist. And there’s cat nuns! And their makeup is fantastic, so much so that you never stop to think, “That’s a person in makeup.” You just accept that they’re cat nuns. Lovely.

Doctor Who Confidential continued the high standards set last year, proving that there really is enough mileage to be gotten out of 13 half-hour making-of episodes. This season already feels more focused on the new series, with less clips and interviews from the classic series. And I’m sure there’s Internet whining going on about that, but I just can’t be bothered to check. The past of the show has been mined fairly thoroughly; I’m happy to learn all I can about the current one.

I do know there’s Internet whining about Totally Doctor Who and Doctor Who Adventures. In both cases, these are products that have clearly been created, designed, and marketed for younger readers and viewers. Every bit of pre-publicity made that clear, and it’s equally clear from the products themselves. So why does the fan response (at least on Outpost Gallifrey) seem to be divided between people who thought they were okay to good, and people who are upset that they are aimed at children? This is why I’ve decided to just avoid hearing what other Doctor Who fans think about the show and its stuff any more.

Me, I really liked Totally Doctor Who. Clearly, at the age of almost 37, I am not the target audience. But I grew up watching these sorts of magazine shows for kids. My earliest recollection is of one called Big Blue Marble, which featured stories about kids and things from around the world. I also remember faithfully watching one called Spot On! when we lived in New Zealand for a year. And I can’t think of a single example of that sort of thing being made in the US any more. So to see something like this again, one that reminds me very much of the shows from my childhood, only devoted completely to something that I love today? And to find it completely entertaining? It’s a great feeling.

And the new comic is pretty nifty, too. Lots of nice pictures, including a full-page pin-up of Rose. Hubba hubba.
Posted by Penelopecat at 7:33 PM No comments:
Email ThisBlogThis!Share to TwitterShare to FacebookShare to Pinterest

James Bond 'Ultimate Edition' DVDs Officially Announced - James Bond 007 - CommanderBond.net - James Bond At Its Best: "While most Bond fans have known about this for some time, Sony has officially announced that all 20 James Bond films will be released as 'Ultimate Edition' DVDs. A preview for the new collector sets is attached to the Sony/Columbia DVD release of Fun with Dick and Jane."
Posted by Penelopecat at 5:12 PM No comments:
Email ThisBlogThis!Share to TwitterShare to FacebookShare to Pinterest
Newer Posts Older Posts Home
Subscribe to: Posts (Atom)