Here are the comics I know I definitely bought in June of 1981:

DC Comics Presents 34 featuring Superman and Captain Marvel. While my first exposure to the character was probably the live-action Saturday morning TV series, I can't remember when I first encountered the comic book version of Captain Marvel. My first memory was of a giant, treasury-sized edition with a photo cover that my dad would have bought for me on a rare (and therefore special) trip to Toys 'R' Us. I believe it featured a big story pitting the Marvel Family against the evil mad scientist Dr Sivana and his family, and a photo cover of Jackson Bostwick from the (possibly then-current) live-action TV series.

Again, reaching back into my memory, I'm pretty sure that Toys 'R' Us was a good distance away from our house, and we stopped there on our way to some rail fan thing my dad was taking me to. I read the whole comic on that trip. It was such a great story, drawn so well (probably by C.C. Beck) that I had to have more. At the time, "having more" meant acquiring stories when the opportunity arose, rather than actively seeking them out, so while I did eventually acquire a copy of Shazam: From the 40s to the 70s from the bargain table of the book department of Capwell's Department Store, I completely missed the regular Shazam series from DC.

So this issue of DC Comics Presents was special. It was my first opportunity to pick up a new Captain Marvel story off the stands, as it came out. Plus, it was my first exposure to Hoppy, the Marvel Bunny, which really amused me. Since so many of my early comics were funny animal books, this comic was like a bridge for me. (And it got me ready for the first appearance of Captain Carrot, less than a year away.)

Marvel Premiere 60, the final Doctor Who issue, featured a painted cover by Earl Norem that captures the spirit of the show, but still doesn't look quite right to me. It's still eye-catching, though; more so back in those days when painted covers were few and far between. I remember my disappointment when I got to the end and saw that the next issue would be featuring Captain Universe (I believe), not Doctor Who. However, at this point, I was already getting in the habit of poking my head in my local comic book store on at least a semi-regular basis.

Tales of the Green Lantern Corps 2 continues what I enjoyed about the first issue. Despite the recent reprinting of this series, I haven't read it in years, so I can't remember any specifics about this issue on its own. However, looking at the other comics that came out this month, I see that if my enjoyment of this series had gotten me to buy the regular Green Lantern series at the time, I would have started reading just at the time the Omega Men made their first appearance. Given that I became a bit of an Omega Men fan from their appearances in Teen Titans and their own book, I'm kicking myself a little bit for not at least checking out Green Lantern at this point.

However, at the time, comics still weren't something I bought on a regular basis, or so I told myself. Oh, how things would change! 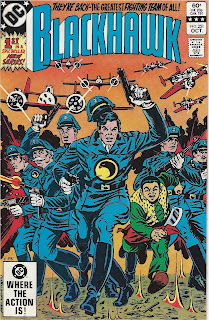 Blackhawk 251 was the first war comic I ever read, I believe. I probably picked it up after reading in Comics Scene magazine that Steven Spielberg was interested in doing a movie version. (And, as it happens, the distant possibility of that is probably the reason the series was brought back at this point, anyway.) I'd certainly never heard of the series, and by starting with issue 251, it wouldn't have caught my eye as a new DC comic. Whatever the reason, I did pick it up, and thus became a lifelong love affair with the creative team of Mark Evanier and Dan Spiegle.

Okay, that may not be entirely accurate. I had probably read their work before, in the pages of Scooby-Doo at least. And I must have seen Spiegle's art in any number of Disney movie adaptations from Gold Key/Whitman. But this would have been the first time I had read a story from them as a collector, with a newfound awareness of creators' credits.

And, again, if I'm honest, it wasn't love at first sight. Still early in my comics collecting career, my ideal artists would have been George Perez on New Teen Titans, Keith Giffen on Legion of Superheroes, and Dave Stevens on the Rocketeer. This issue came out the same month as Batman Annual 8, still my favorite Batman story of all time, with Trevor Von Eeden's exciting new art style, so previous to this, I would have been mostly interested in slick, detailed artists. At the time, I told myself that Spiegle's work here was meant to deliberately evoke feelings of the crude Golden Age art I had seen. My early adolescent tastes hadn't actually grown at that point to embrace the idea that art could come in different styles, and each one could be equally good. 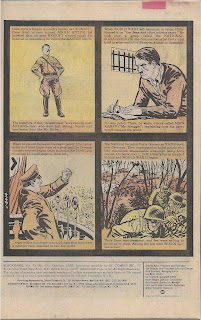 I also wasn't used to Evanier's writing style, or the style of DC war comics, as established by the great Robert Kanigher. On the other hand, I didn't know that much about World War II history, either. I knew that the Allies (mostly America) had fought the Nazis, but that's about it. So the first page, with its capsule history of Hitler's rise to power, felt like a real education.
My grandfather had grown up in Germany as a Jew, and left before WWII, sensing which way the wind was blowing. As a twelve or thirteen year old kid, I knew just a little about his history, but didn't really understand what things must have been like. Reading this story, about the Nazis trying to force a small Dutch village to vote in favor of occupation, felt like I was finally getting a picture of the sort of world my grandfather had fled. 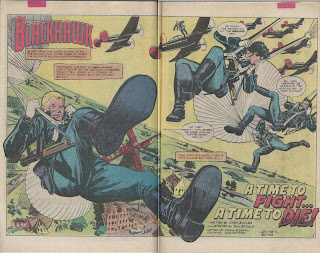 Viewed in context of the entire series, Blackhawk 251 is a good issue, but perhaps not the finest of the series. As an introduction, however, it's great. The cover, by Blackhawk fan Dave Cockrum, is an iconic image that effectively communicates the tone of the story. The first page, with its storybook retelling of Hitler's background, sets the scene, but it's only with the double-page splash on pages 2 and 3 that the reader is thrown into the action, literally.
The story itself is fairly simple, with the abduction and rescue of Blackhawk more a vehicle for retelling the group's origin than an important part of the plot in its own right. Having said that, it's told well, with both the writing and art working together extremely well. 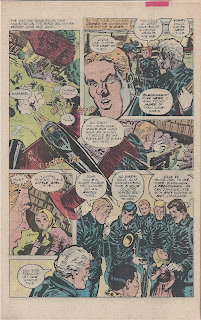 Evanier manages to introduce the members of the Blackhawks as individuals through the course of the story, without having to rely on any contrived "roll-call" type scenes. He makes sure that each character's name is mentioned (although, again, not in a contrived manner) and gives each character his own distinct voice patterns. In the case of the Dutch Hendrickson and the Swedish Olaf, this means laying on some thick accents, but it doesn't feel overdone. He also gives each character a distinct personality, which comes through in the dialogue.

The voice Evanier gives this comic is distinct and personable, almost as if we are listening to someone telling the story out loud. It's reminiscent of--and clearly inspired by--the great war comics of Robert Kanigher, but not as bombastic. 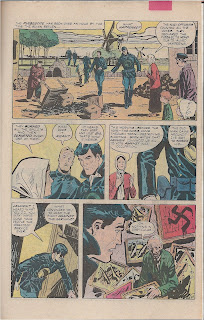 Perhaps my favorite bit, though, comes at the end, when Evanier and Spiegle work hand-in-hand to show why the village elder Leuuen has chosen to convince his village to stand up to the Nazis, whereas previously he had been prepared to take the path of least resistance. All the explanation is there in the art, and Evanier knows enough to not overexplain things.

It's an effective first issue, which made me feel as if I understood the characters and the premise. While later issues, free of the burdens of introductions and exposition, gave us stronger stories, this one is just fine. It made me want to come back for more, which is the most important job of a first issue.
Posted by Penelopecat at 10:00 AM 1 comment:
Email ThisBlogThis!Share to TwitterShare to FacebookShare to Pinterest
Newer Posts Older Posts Home
Subscribe to: Posts (Atom)