In May of 1981, I turned twelve years old, and I bought Tales of the Green Lantern Corps 1, by Mike Barr, Len Wein, and Joe Staton. I had no idea I would become a huge fan of all three creators.

I'm not sure what the impetus was to purchase this book, other than the fact that it was a first issue, and it had a great cover by Brian Bolland. I had only ever read one issue of Green Lantern, which the son of a family friend had brought with him when they came to visit us. It was probably illustrated by Mike Grell, and therefore probably written by Denny O'Neill. And that's all I remember, except that Green Lantern was still traveling with Itty, an alien flower riding around on his shoulder. (Whenever I hear folks griping about DC Comics suddenly ignoring the past, I just want to ask how many of them remember Itty.)

I also knew the character from his appearances in Superfriends, including an episode which told his origin. I think I was intrigued by the notion of Hal Jordan being one of thousands of Green Lanterns, which made him different from other superheroes. This story, possibly the first that really brought the Green Lantern Corps together in one huge adventure felt special. it felt epic, because no threat had ever been so huge it took the whole corps to fight it.

Obviously, it made an impression on Geoff Johns as well. Not only did he bring the villain back for his Blackest Night series, but much of his work on Green Lantern has been about giant menaces which take the entire corps to defeat. What made this story special--its uniqueness--has been made commonplace in the pages of contemporary Green Lantern comics. Ironically, in trying to make the Green Lantern series bigger, I feel like Johns has made it smaller and less interesting.

The Green Lantern stories of today--at least until I stopped reading them--seem to favor spectacle over character, which drove me away. This miniseries, on the other hand, takes the epic and makes it personal. By introducing rookie Green Lantern Arisia, Barr and Wein give the story a character the reader can identify with and root for. We aren't asked to follow a bunch of disparate alien characters with no real discernible personalities. Instead, we see Arisia first reacting to things the way we probably would react: with fear and anxiety. Eventually, we see her reacting as we hope we'd react: with strength and courage.

This same month saw the release of DC Comics Presents 33, guest-starring Captain Marvel, and Eclipse Magazine 1, with the first installments of Coyote by Steve Englehart and Marshall Rogers, and Ms Tree by Max Allan Collins and Terry Beatty. At the time I hadn't heard of Englehart and Rogers, or Collins and Beatty, so I think I can be excused for not picking the magazine up. Besides, I was 12 years old. Eclipse was a magazine for grown-ups. (It even had boobies.) It wouldn't be too long before I did get some issues of Eclipse, but that's a story for another week.

DC Comics Presents 33, on the other hand, I should have picked up. I was a huge Marvel Family fan at that point, thanks to reprints, and the fact that I overlooked this at the time just shows that a bit of me was still made of stupid. 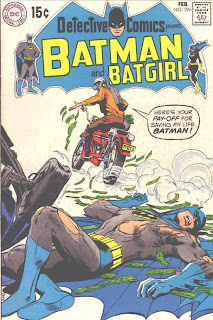 After the heights of the last couple of Batman stories, Detective Comics 396 is a bit of a letdown. Written by Frank Robbins and drawn by Bob Brown and Joe Giella, "The Brain-Pickers!" features the oddball tale of a stock-market whiz who calls in his stock picks to his office via short-wave radio while he motorcycles across the country. A gang of crooks decide to take advantage of his skill by forcing him to work for them. But he convinces them that he can only work his magic by using his tried and true methods. So they follow him as he rides his bike, and it's up to Batman to figure out his location and save him. 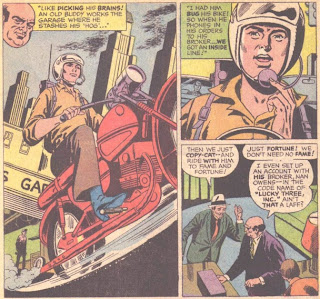 There's nothing wrong with the way Batman solves the story (stockbroker Rory Bell sends clues to his location disguised as stock buys). But it feels as if the story was written with the idea of Batman having to track someone by hearing clues broadcast over the radio, and then Robbins worked backwards to figure out a situation where that would be necessary. It feels unnecessarily contrived, and that makes it less enjoyable for me.
The art, by Brown and Giella, continues to tell the story perfectly well. Compared to the work of Neal Adams and Irv Novick, however, it's not particularly outstanding. 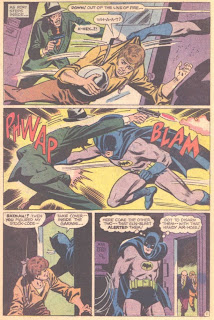 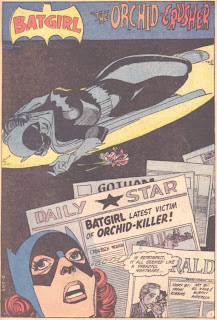 The Batgirl backup story, written by Robbins and drawn by Gil Kane and Murphy Anderson, is a different story. Telling the first part of Barbara Gordon's investigation of a series of dating-agency-related murders, it's a mystery that actually creates some suspense. It's also a case that could only be investigated from the inside by Batgirl. 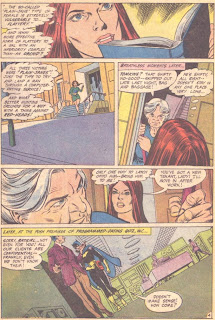 The idea of a serial killer preying upon women, and our heroine placing herself in a position of jeopardy through her investigation isn't a new one. However, within those parameters, Robbins creates a believable investigation. He also gives it some depth by allowing Barbara's undercover investigation to cause some tension between her and her boyfriend, private eye Jason Bard. Overall, it's an effective first installment that packs a lot into its short page count, and leaves me eagerly awaiting the next chapter. 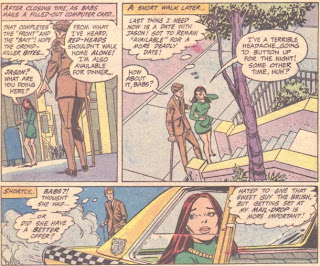 It helps that the art is a great deal more dynamic and exiting that that of the lead story. Kane's layouts are a lot more interesting, and his characters a lot more fluid, than Bob Brown's. Brown gets the job done, but Kane gets it done with style.
Posted by Penelopecat at 10:00 AM No comments:
Email ThisBlogThis!Share to TwitterShare to FacebookShare to Pinterest
Newer Posts Older Posts Home
Subscribe to: Posts (Atom)