I didn’t actually finish reading any graphic novels this week, because literally every book I had on request at the library came in at once. And most of them have people waiting for them, so I’ve been making reading those priority. Incredibly—for me—I managed to get through two books in the past week, and halfway through a third. And, so far, one and a half of those have been a lot of fun. 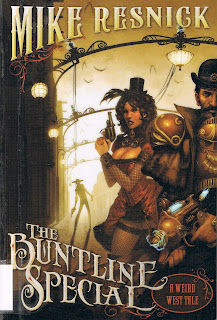 Last week, I blogged about how much I love Weird Westerns, in relation to the comic Sixth Gun. This week, I read the eagerly-awaited The Buntline Special by Mike Resnick. I say “eagerly awaited,” because, while I hadn’t read anything by Resnick before, I knew he was a veteran author who seemed to have lots of positive reviews. And I remembered reading an interview with editor Lou Anders, where he talked about how he didn’t want to just publish Steampunk books just because it was a hot genre. Maybe I approached the book with too high expectations, but I don’t think that’s the only reason the book let me down.

The Weird Western genre is so named because the stories need to be, well, weird. Unfortunately, in The Buntline Special, Resnick has taken a pretty straightforward Western story and layered science fiction, fantasy, and steampunk trappings on top of it. That’s an approach one can take, I suppose, but for me, it only counts if those fantastic elements are an intrinsic part of the story. In this case, they’re not. You could take every one of those pieces out and still have the exact same story.

For example, in the book, Thomas Edison and Ned Buntline have invented electric coaches that are taking the place of stagecoaches. If they were regular stagecoaches, it wouldn’t change anything. One character is cursed to transform into a bat at night, but the fact that he does doesn’t have any real impact on the story. An undead zombie gunfighter shows up in town, but since the first time anyone actually fights him, it’s with a special zombie-killing gun, he could just have easily been an ordinary man defeated by an ordinary gun.

And it goes on. The town brothel has robot whores, just because. The gunfight at the OK Corral happens just like it did in real history, only the characters are wearing brass armor (because stuff is made out of brass in steampunk stories). Resnick sets up an alternate history in which Western expansion is being blocked by Native American magic, but since all the conflicts are personal, take place in one town, and have nothing to do with that Westward expansion, that’s just background information that, again, has no actual impact on the plot.

Even worse, there’s no real sense of conflict at all, and certainly no sense of suspense or surprise. Doc Holliday, the main character, is so calm and cool and relaxed, and that lack of tension spreads through the whole book. The characters are all fairly indistinguishable from one another. I could tell the difference between Wyatt Earp and his brothers mainly because he was named Wyatt and given dialogue. The difference between Ned Buntline and Thomas Jefferson boils down to one having a mechanical arm (because it’s WEIRD!). Holliday fights the Clanton brothers because, we’re told, they’re bad guys and thieves. There’s no complexity, no subtlety, and no surprises.

Worst of all, Resnick commits the cardinal sin of setting up an alternate world and then not having any of the differences matter. Like I said, the biggest difference between this world and ours is the existence of magic (which has no impact on the plot) and the Native American magic preventing white men from crossing the Mississippi (which has no impact on the plot). So ultimately, it’s an alternative history novel where the differences don’t matter, it’s a Weird Western that isn’t weird, and it’s not a particularly good book at all anyway. 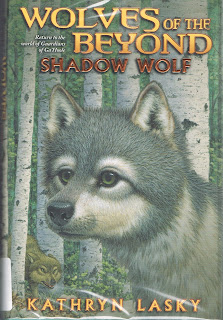 Much better was Shadow Wolf, the second book of Wolves of the Beyond by Kathryn Lasky. She’s a prolific children’s author, but I hadn’t read anything by her until after I saw (and loved) Legends of the Guardians: The Owls of Ga’Hoole, and read the first book in the Guardians of Ga’Hoole series that it’s based on. I haven’t read any more in that series yet (the wife has read the next two, and says they’re just as good), but when I read that she had started a new series, set in the same world, but about wolves, I jumped at it. There’s fifteen Guardians of Ga’Hoole books out already. At the time, there were only two Wolves of the Beyond books, so I stood a chance of getting caught up quick.

Fortunately, two books in, there are very few spoilers for the Guardians of the Ga’Hoole books. More fortunately, the Wolves books are great. They follow Faolan, a wolf cast out from his own pack shortly after birth and left to die, because he was born with a splayed paw. Raised by a grizzly bear, he eventually finds his way back into wolf society as a gnaw wolf, the lowest member of the pack. Gnaw wolves keep the wolves’ history by gnawing it into bones, something that Faolan has become exceptionally at doing. But he isn’t satisfied with his lowly station.

This second book focuses a lot on wolf culture: the hierarchy of different positions in the pack, and the complex rules of social behavior that govern how different stations in that hierarchy interact. As with her owl books, Lasky combines real-world animal behavior with a detailed fantasy world. Unlike the first owl book, which introduces an epic plot right away, the Wolves of the Beyond stories so far have focused on the more personal story of Faolan’s growth and development. Hints of a greater story have been laid throughout the books, but they have so far remained in the background.

Shadow Wolf is pretty much everything that The Buntline Special isn’t. The characters are detailed and compelling, with realistic conflicts between them driving the story. Even the elements that aren’t immediately resolved within these installments feel connected to the characters we’re reading about, and come across as if they’re going to be addressed later. Nothing feels particularly gratuitous, and it all adds up to a really satisfying read.

The third Wolves of the Beyond book comes out in June, and I’ll be reading it as soon as the library gets it. I’ve also got 14 more Guardians of Ga’Hoole books to read. So I’m good. In the meantime, I’m halfway through Dean Koontz’s latest book, so you may be hearing about that next week.
Posted by Penelopecat at 5:55 PM 2 comments:
Email ThisBlogThis!Share to TwitterShare to FacebookShare to Pinterest
Newer Posts Older Posts Home
Subscribe to: Posts (Atom)