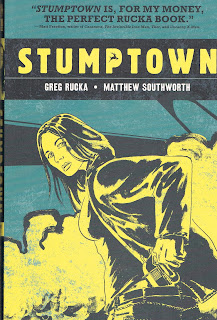 First, congratulations on Marineman’s nomination for an Eisner award for Best New Series. Well deserved. If you haven’t read it, and have an iPad or similar device, the first issue is available digitally from Image Comics for free. Seriously, check it out.

The other week, I finally, properly read Stumptown, by Greg Rucka and Matthew Southworth (also up for an Eisner). I had read the serialized version, but there were big delays between issues when it came out. Plus, I was so behind on my comics reading at that point, I accidentally read the fourth issue before reading the third. So, really, reading this new collected edition was the first time I’ve read this story properly. And, having done so, I think this may be my favorite Greg Rucka comic book series. (Maybe even my favorite Rucka series overall.)

Stumptown tells the story of Portland, OR private detective Dex (short for Dexedrine) Parios as she searches for a missing girl, in order to erase her gambling debts at a local casino. Both the story and the art are straightforward and down-to-earth, full of local Portland details that give it a strong sense of place. While the delays in the original issues may have been down to Matthew Southworth, ultimately the results are worth it. Rucka has said that they won’t release the next story until they have most of the issues done already. That's great, because it means no delays, but also that the book will still be drawn by Southworth. 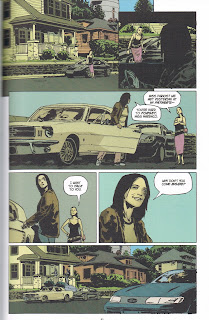 I mentioned in an earlier blog about how much I enjoyed his most recent novel, which may turn out to be the final Queen & Country story. And while I love that series tremendously, and I love Rucka’s two Whiteout stories, Stumptown has them beat for me. Unlike his other comics work, it’s much more human and down to earth. As relatable and real-world as he makes the espionage setting of Queen & Country, it’s still a globe-trotting spy story. Whiteout still has its exotic setting. But Stumptown is an ordinary story about (relatively) ordinary people in a normal city, motivated by ordinary petty things.

I recently read Brad Meltzer’s latest novel, The Inner Circle. What I really enjoyed about it was how what looked to be a centuries-old conspiracy, in the vein of The DaVinci Code, boiled down to petty, venal, human emotions. And that’s what I loved about Stumptown; despite some characters’ ties to real-world organized crime, the story is ultimately about love, loyalty, and family. 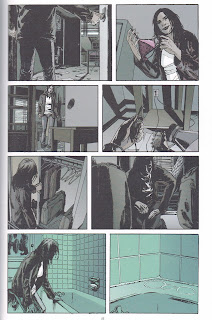 I had read interviews where Rucka cited ‘70s and ‘80s TV detective shows like The Rockford Files, Simon & Simon, and Magnum, PI, as influences on Stumptown. Fortunately, he’s created his own version of those sorts of series, instead of “creating” a thinly-veiled adaptation of something he loves. What Stumptown has in common with those shows is its focus on a normal human being, not a superhero, just trying to make a buck by doing a job anyone could do. Dex, his detective hero, doesn’t have superpowers, and she isn’t superintelligent. She’s determined and stubborn and observant. In short, she’s someone you believe could actually exist.

The situation she finds herself trying to solve is equally believable. The fate of the world isn’t at stake. There’s no secret weapons or larger-than-life villains here. It’s just a story about how people love each other, or want to be loved, and what that love or lack thereof drives them to do.

I’ll always have a soft spot for Greg Rucka’s work. A couple of years ago, I was trying to put together a comic convention for the library. I knew that the only way it would succeed would be for us to get a big-name writer to headline the show. And Rucka was always at the top of my list. And he came to our little convention, and helped make it a huge success.

On top of that, he was an incredibly nice guy. Polite and friendly and down-to-earth, there was nothing of the superstar about him (which, for a guy with acclaimed runs on Batman, Superman, and Wonder Woman, is no mean feat). When you listen to him talk about his stories, it’s clear that he has a passion for, and deep understanding of, the characters he is writing. Doesn’t matter if it’s a character he owns, or a company character like Superman or the Punisher. He understands what drives those characters, and sees them all as deep, complex beings.

Most importantly, he’s a Doctor Who fan. So, you know, gotta love him.

I’ve also got a soft spot for detective comics, particularly those starring women. One of these days, I’ll probably blog about the first issue of Comics Scene Magazine, and the influence it had on me. One of the articles in it (if I recall correctly) was an interview with Max Allan Collins, who was just beginning his Ms. Tree series. That would probably have been one of the earlier alternative comics I started following, and it also led me to Collins’ prose work, which led me to other mystery writers. (It also led me to Dick Tracy, but that's another story.) So whenever someone starts a new female detective series, I’m at least curious.

So congrats to Rucka and Southworth for their Eisner nomination, and just for creating a great comic. I look forward to the next installment, whenever it turns up. I have every confidence that it’s going to be great.
Posted by Penelopecat at 5:17 PM No comments:
Email ThisBlogThis!Share to TwitterShare to FacebookShare to Pinterest
Labels: comic books, detective stories, greg rucka, stumptown
Newer Posts Older Posts Home
Subscribe to: Posts (Atom)