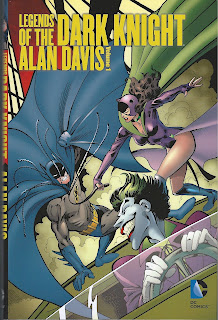 Batman, as a fictional character, has been around since 1939. As with any long-lived character in popular culture, he has changed and evolved to reflect changes in the culture. Over 75 years, that’s a lot of change, and while it’s easy to be a fan of Batman, the question becomes of which version of the character is one a fan? Is it the dark, gritty loner of the first year of the series? The campy version from the 60s TV series? The version from the 70s, returning to the dark, serious tone but still feeling human? The obsessed, emotionless douchebag of the current series? One of the things I loved about the short run by Mike W. Barr and Alan Davis in Detective 569-575 was that it showed that a Batman story doesn’t have to be exclusively either dark and humorless or light and silly. It’s one of the most successful merging of the darker, more realistic tone of the 70s and 80s with the lighter, more fun stories of the late 40s and 50s, and that’s why it’s perhaps my favorite period of Batman comics of all time.

By the time these stories started coming out during my senior year of high school, I was already a fan of both Mike W. Barr and Alan Davis. In fact, the first then-modern Batman story that I had bought was the fabulous Batman Annual 8, written by Barr with fantastic art by Trevor Von Eeden. I’d followed Barr through various Batman annuals and specials (including his work with Michael Golden on the oft-reprinted classic, The Player on the Other Side) and on Batman and the Outsiders (another favorite). So when he finally got a shot at writing a regular solo Batman comic, I was pretty excited. 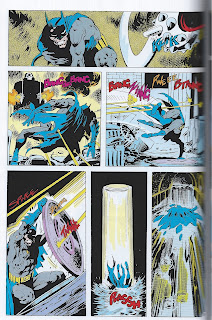 I probably became an Alan Davis fan through his work on Batman and the Outsiders as well, when he took over from cocreator Jim Aparo, who had moved over to the new Outsiders “deluxe” comic. As a kid, I was very much a fan of the slick, detailed work of folks like George Perez, Paul Smith, and John Byrne, and Alan Davis fit right in with that. His characters were distinct individuals who somehow looked like believable, iconic characters, even though they were built to superhero proportions. And he drew the best facial expressions. His characters were great actors on the page, and I was ecstatic that he’d be working with Barr.

It’s been years--decades, even--since I’ve read these stories from Detective, now collected together in Legends of the Dark Knight: Alan Davis Volume 1. And they absolutely hold up. The first couple of issues, featuring a plot by the Joker to turn Catwoman evil again, just to mess with Batman, is great. While written to fill an editorial directive to make Catwoman no longer aware of Batman’s true identity, Barr takes the opportunity to illustrate the Joker’s craziness (messing with Batman is more important than anything) and give Catwoman some new edginess. 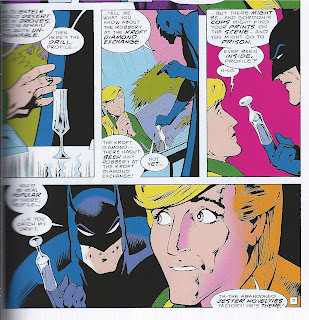 Also, in rereading this story, a couple scenes really illustrated to me why I don’t enjoy reading the current Batman stories. About a year ago, I read the first collection of the current Detective series, and was really upset by a sequence where Batman interrogated a thug by beating the crap out of him, only to discover that he was never going to get any answers, because the man had had his tongue cut out. So, knowing that, Batman punches him once more for good measure before turning him over to the cops. That's not the Batman I know; that's a cruel bully.

In this story, Barr and Davis show Batman intimidating information out of a crook though dialogue alone. That’s the Batman I know, who uses his wits instead of his fists whenever he can. Of course, it’s an action comic; more often than not things are going to be resolved through fights, but they don’t have to be acts of bullying on Batman’s part.

These stories also have a great deal of humor. One scene, with Batman tricking a villain’s thug, has me laughing every time I see it. And Robin is constantly making jokes and puns. It’s not the unrelentingly grim comic I’ve come to associate with the Batman of today. And, while I get that today’s Batman is the version that today’s audience wants, and that it’s not out of line with what’s come before, it’s not a version that makes me happy to read. 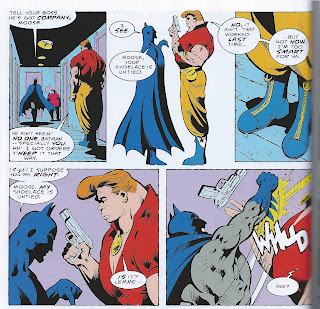 Barr and Davis’s Batman is very human. He doesn’t treat Robin as just a replaceable soldier in his war against crime. He talks about how Robin helps keep him human, and how he takes Robin out crimefighting now, so that he doesn’t have vengeance bottled up inside of him his whole life, and ends up like Bruce Wayne. He even gives Robin the chance to stay out of what promises to be a pretty nasty fight.

In many ways, these stories work for me because they fuse the darker, more complex and realistic Batman of the 70s and 80s, by creators like Denny O’Neill, Neal Adams, Frank Robbins, Irv Novick, and Don Newton, with the more wacky, stylized, larger-than-life crimes seen in the late 40s and 50s by Bill Finger and Dick Sprang. This may be best illustrated in the story featuring the Mad Hatter, which even features a fight involving giant props. 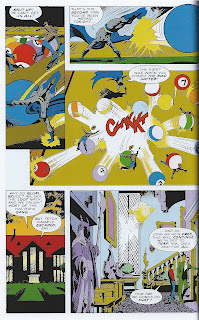 In fact, in the previous issue, Barr even reintroduces the representational title page to the comic, setting up the tone of the story without depicting a scene in sequence. It’s a very retro thing to do, but feels perfectly at home here. 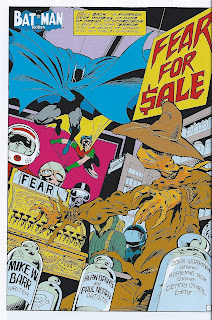 While this collection starts off with several stories about Batman’s colorful rogue’s gallery, it takes a turn toward the dark and somber towards the end, with a reflective tale of the Batman looking back on his origins. This leads into the first chapter of Batman Year Two, which is the only chapter reprinted here. Unfortunately, through editorial interference, Alan Davis quit the book after completing that first chapter, and went to work for Marvel.

The circumstances surrounding his leaving, as he relates in Modern Masters: Alan Davis, are particularly frustrating. He had drawn a story with Batman carrying the gun used to kill his parents. Because Batman is a big guy, he needed to carry a big gun, and the script specified a Mauser. That script was approved by their editor, and so was the art that Davis turned in. However, when David Mazzuchelli turned in his art for Batman Year One, he had illustrated the single panel showing Joe Chill’s gun with him holding a .45 automatic. So, instead of having Mazzuchelli change his one panel, Davis was told to redraw his gun throughout the entire issue. This was just the latest in a string of what Davis saw as editorial incompetence, so he quit.

And that’s disappointing, because it draws to a premature close one of the most fantastic periods of Batman’s history. Barr’s brilliant combination of two disparate periods and styles of Batman stories would not have been nearly as effective without Davis’s art. His pencils managed to bridge the serious drama with the more outlandish sequences, with the same delicate balance as Barr’s scripts. His Joker could look like a crazy clown, but could also look incredibly menacing. The Batman creators of today seem to feel that the way to add menace to the Joker is to have him cut off his own face and then staple it back on. Davis managed to make him look scary by drawing him in a way that made him look scary.

Also, to this day, Davis is one of the few artists I can think of who can convincingly draw Batman as if he’s smiling. 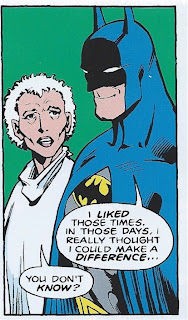 I would be remiss if I didn’t at least mention the other artists who worked on the 50th anniversary story along with Davis. Terry Beatty did a great job with hard-boiled detective Slam Bradley, who predated Batman in Detective Comics. When this issue came out, I was already a Beatty fan from his work with Max Allan Collins on Ms Tree. After this, though, I would have been almost as excited if he and Mike Barr had started up a Slam Bradley comic.

Veteran creator Carmine Infantino returned to his stretchable detective, the Elongated Man. While at this point in his career, Infantino’s art was much more stylized than in his earlier years, he remains an innovative storyteller. And ER Cruz’s return to the Victorian setting of Sherlock Holmes is gorgeous. All in all, this story, teaming up Detective Comics’ greatest detectives in a story featuring Sherlock Holmes, was a fantastic celebration of the series. And the fact that it’s all one self-contained story is even better.

I’ll be the first to admit that not everything from my childhood lives up to my memories. But these stories do. They remind me why I love Batman, as a character. And, as long as I have books like this on my shelf, I don’t need to settle for the new stories that I’m not enjoying. I can go back and reread the ones that I do love, and remember those happy days.