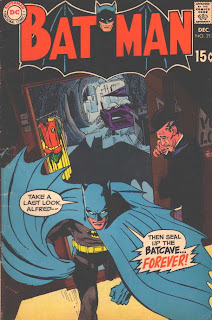 I started my Bronze Age Batman reread with Batman 217, written by Johnny Hazard creator Frank Robbins and drawn by Irv Novick and Dick Giordano. The Batcave Companion listed this issue first in their Bronze Age checklist, so that's my guide.

It's also an issue that heralds major changes in the Bat-status quo. I don't want to get off on a rant about the cosmetic changes that contemporary comics foist on readers under the guise of "Nothing will ever be the same again!" (Until, of course, it eventually is the same again.) But the changes in this issue (Robin heading to college, Bruce Wayne moving out of Wayne Manor and into a penthouse atop the Wayne Foundation building) did, in fact, last for quite a long time. (Permanently, in the case of Dick Grayson moving away.) And alongside the changes, we also get a complete story about Batman investigating a mystery.

With this story, we still find ourselves firmly entrenched in the era when Batman was still the World's Greatest Detective, not just the World's Greatest Guy at Hitting Crazy People (not to mention the World's Biggest Dick). In this issue, he begins a (short-lived) initiative to specifically seek out and help victims of crimes who otherwise are not seeing justice done.

The first benificiary is to be a female doctor, whose husband was murdered, and who now needs help with funding their clinic. In the course of meeting and interviewing her, Bruce Wayne learns the circumstances of the doctor's murder. As one might expect, the keen analytical mind of Batman can't help putting the clues together from her story, and ends up investigating the crime himself. And, as one might expect, he solves it.

Although the mystery is solved by the end of the issue, it doesn't feel particularly rushed or simplified. Robbins is a professional writer, and tells a compelling, interesting story within his allotted page count. He also allows the reader to follow along with the investigative process, providing clues but giving the reader the chance to put them together themselves, before revealing the answers.

In terms of characterization, there are a couple of odd moments. Bruce's reaction to Dick leaving seems a bit overwrought. This might be because seeing Bruce Wayne or Batman express any kind of emotion besides anger and dickery has been alien to the character for the past 20 years or so, and also possibly because it's really only dealt with for a couple of panels before getting on with the story. (This may also be related to Robbins' background as a newspaper strip writer, where information needs to be communicated quickly in just a few panels.) Bruce also refers to Alfred as "Alf," which, as a longtime reader, just feels weird. 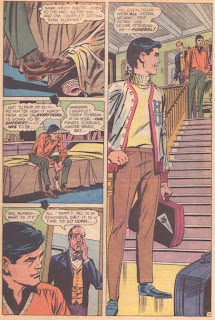 Art-wise, there are no similar odd moments. Novick retired as an artist when I was just getting into comics, so I am only familiar with his work through reprints and back issues. The few new stories I read when I was a kid were published at a time I was enamored with guys like George Perez, Keith Giffen, and John Byrne. I know Novick drew a Superman/Blackhawk story I read in DC Comics Presents, but since he wasn't as flashy as the guys I liked, it didn't leave a particularly strong impression.

Now, I can see his command of storytelling and anatomy. Neal Adams will always be hailed as the definitive '70s Batman artist, but I'd love to see Novick get some recognition as well, because he's great. He includes some particularly thoughtful touches, such as including a spectral Batman representing Bruce's thoughts as he puts the clues together. And, of course, he's ably inked by Dick Giordano. 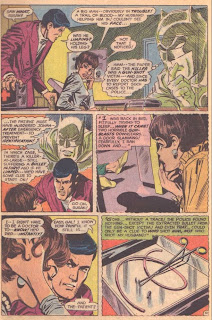 Despite the quirks of the writing mentioned above, Batman 217 is a great jumping-on point to the series. (Well, it would have been 40 years ago.) It definitely lives up to the promise of the cover image, making major changes to the series while still presenting an accessible story to show readers what the series is like.