Full-length trailer for the new movie from the folks who brought us Shaun of the Dead
Posted by Penelopecat at 10:32 PM No comments:
Email ThisBlogThis!Share to TwitterShare to FacebookShare to Pinterest 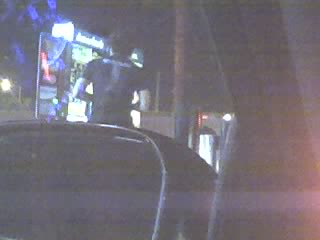 Not clear on the whole drive-thru concept.

So I'm in the car at the Sonic drive-thru, and the passenger in the car in front of me gets out of his car to look at the menu up close! Now, admittedly, the print on the menu is pretty small, so some slack shall be cut for him, but still...
Posted by Penelopecat at 6:52 PM No comments:
Email ThisBlogThis!Share to TwitterShare to FacebookShare to Pinterest

'Nine' deep-sixed over bad numbers - CNN.com: "ABC's low-rated freshman drama 'The Nine' -- about the aftermath of a botched robbery and hostage situation -- has been taken off the schedule, effective immediately.Seven episodes of 'The Nine's' 13-episode order have aired. On Wednesday, the final night of the November sweeps, ABC will air a special '20/20' in the low-rated serialized drama's 10 p.m. slot.According to the network, the remaining six episodes of 'The Nine' will return later in the season. The decision mirrors ABC's move this month to bench the new drama 'Six Degrees.'"
Posted by Penelopecat at 11:19 AM No comments:
Email ThisBlogThis!Share to TwitterShare to FacebookShare to Pinterest

While I do watch far too much television, I spend some time reading, too. And not just comics, although there’s nothing wrong with that. So let me talk a little about some of the books I’ve read recently.

Fragile Things by Neil Gaiman
It’s such a cliché for people who like the things I like to be big fans of Neil Gaiman. But I am a big fan, and have been since Don’t Panic, his non-fiction examination of Douglas Adams’ Hitchhikers Guide to the Galaxy series. His novels are always a treat, but his short story collections are every bit as fascinating and magical. I love seeing him experiment with form and structure, as he does here, and it makes waiting for the next novel just that much more bearable.

Here, There Be Dragons by James A. Owen
Back in the 1990s, James Owen created a comic called Starchild, which felt like a classic European fairy tale for adults. The story was compelling, and his intricate, detailed art really drew me in. He only produced probably 17 or 18 issues (Two complete stories and the beginnings of a third) but that was enough to make him one of those creators I always try to keep an eye out for.

Well, now he’s back, reinventing himself as a prose fantasy author. (Truth be told, I believe he has a series of novels out in Germany, but this is his first big push in the American market.) He illustrates the book as well, and his art has gotten even more intricate and polished in the past few years. The story, about a group of men from 1917 London on an adventurous quest through a series if magical, imaginary lands is an exciting page-turner, and it’s fun picking out the various literary references. Unfortunately, the characters aren’t portrayed in quite enough depth to really make me feel for them, but that’s the book’s only real flaw. And, quite honestly, it’s the same problem I have with Lord of the Rings, and I found this book more interesting. Maybe because it was easier to remember the characters’ names.

This looks like the beginning of a major return from James Owen, with a sequel due next October (and hopefully one every October after that), a picture book next year, new issues of Starchild, and possibly a new graphic novel series.

Doc Savage and the Shadow reprints, by Lester Dent and Walter Gibson
I think I’ve talked about this before, but when I was a kid, I became a fan of both the Shadow and Doc Savage through adaptations. In the case of the Shadow, it was the DC comic by Denny O’Neill and Mike Kaluta. With Doc Savage, it was an NPR radio adaptation. It wasn’t that hard finding Shadow and Doc Savage reprint paperbacks at used book stores—in fact, Doc Savage stories were still being reprinted at that point—but while I read more Shadow novels than Doc Savage ones, I never really found myself diving into those original books the way I did with other series I love, like Doctor Who.

Now, Shadow fan/historian Anthony Tollin, along with Doc Savage expert Will Murray, is reprinting both series in a monthly series of paperbacks packaged to closely resemble the original pulp magazines. He’s using the original covers, and formatting them just like the old magazines, with two columns plus the original illustrations. They’re newly typeset with the typos corrected, and there are articles from Tollin and Murray putting the stories into context, and overall, it’s a fantastic package.

So this is my first real chance, as an adult, to read chunks of these stories, and I’m pleased to say that they hold up. I’m still a bigger fan of the Shadow, and I would argue that Walter Gibson is a more polished writer, but I’m really growing to enjoy Lester Dent’s Doc Savage stories. He’s got a much more distinctive, quirky, idiosyncratic writing style that almost sounds like an oral retelling of a folk tale or something. In a lot of ways, it reminds me of L. Frank Baum’s Oz books in terms of style, and that’s meant as a compliment.

It appears that these reprints will be coming out monthly, so hopefully I’ve got those to look forward to for a while.

I Shouldn’t Even Be Doing This by Bob Newhart
If I can say this without sounding too whiny, I don’t remember doing a whole lot of things with my parents. I do remember watching the old Bob Newhart Show with them every week. And I must have only been seven or eight at the oldest, so this would have been a formative influence on my sense of humor.

Bob Newhart’s new autobiography perfectly captures the tone of his standup and television persona. It isn’t particularly lengthy, focusing mostly on his professional life, and only running a little over 200 pages. But with someone like Newhart, I don’t know if I’m looking for hundreds of pages of little details of his childhood. I want to know him as the person I’ve seen on TV, and this book covers how he got there. And it gives me some idea of what Newhart is like as a person. And it made me laugh.

I asked my brother to give my dad a copy of this book during his most recent hospital stay. I had hoped it would cheer him up a little, plus give us something in common to talk about. But my dad still hasn’t read it.

Comet in Moominland by Tove Jansson
The second Moomin book I’ve read, and the first in the series (thanks so much for your helpful listing of the order of the books, Amazon.com). I wish I had read this one first, since it introduces the vast cast of characters I found myself plunged into in Finn Family Moomintroll. But otherwise, no complaints. Why I can have so much trouble remembering the names and characters from Lord of the Rings and not have the same problems here, I can only speculate. I think it’s because the stories here are so much more relatable, despite the otherworldly characters. They’re gentle tales of family and friendship, not Big Epic Battles in which it’s important to remember who is killing and who is being killed, even though it ultimately comes to nothing.

Plus Tove Jansson manages to create a much more tangible world for me, focusing more on descriptions of setting and sensation, rather than doling out bits and pieces of made-up histories and language. I can only imagine that her setting is based on her home country of Finland; I’ve never been there, but this feels like I would imagine Finland to feel.

Just received the first collection of Jansson’s Moomin comic strips in the mail today, and that looks every bit as charming as her books. Definitely planning on continuing the series.

The Devil in Amber by Mark Gatiss
I really loved The Vesuvius Club, Mark Gatiss’ first Lucifer Box novel. It was genuinely funny, but also a good, solid pastiche of turn-of-the-century pulp adventure stories, with some wonderful weirdness mixed in.

This sequel felt a bit more serious, and while it worked just fine as a relatively straight adventure novel with humorous overtones, I didn’t embrace it the same way I did the first one. It was just a little too conventional, I suppose. Although, having said that, I still enjoyed it quite a bit, and do hope that we’ll see more books from Mark Gatiss, either part of this series or not, more humorous or not. (It’s not like his work for Doctor Who has been laugh-out-loud…)

Dark Harvest by Norman Partridge
It’s about time someone published a new Norman Partridge novel. And it’s well worth the wait. And I just finished it last night, so I’m not really ready to say anything about it yet. Still needs to percolate a bit.

And in between, I’ve finally gotten caught up on the latest Doctor Who novels, which were all fun.
Posted by Penelopecat at 5:42 PM No comments:
Email ThisBlogThis!Share to TwitterShare to FacebookShare to Pinterest

Very tense episode of The Amazing Race tonight.  I have to admit, I'm glad Kandyce(sp?) and Dustin did not get eliminated.  They made a careless mistake, and it would have totally been their fault if they had been eliminated.  But they've been consistently racing better than the other teams, it's nice to see that a rare instance of sloppiness didn't cost them everything.
Posted by Penelopecat at 9:53 PM No comments:
Email ThisBlogThis!Share to TwitterShare to FacebookShare to Pinterest
Newer Posts Older Posts Home
Subscribe to: Posts (Atom)