Having complained oh-so-much about Infinite Crisis and its related comics, I thought it wouldn’t hurt to say something positive about comics. So here’s what new stuff I’m ordering from the current Previews catalog:

CONAN AND THE DEMONS OF KHITAI TP
I’m enjoying Dark Horse’s monthly Conan series so much it’s scary. But the miniseries, I’m waiting until they’re collected, instead of buying the individual issues. (Just don’t need the comics piling up around the house, and I don’t want to wait a quarter of a year for a self-contained story that will take me less than an hour to read...)

CONCRETE VOL 6 STRANGER ARMOR TP
This may be the final (to date) collection of Paul Chadwick’s excellent Concrete series. Definitely one that holds up to rereading, and one I’d rather have on the bookshelf than stuffed away in some comics box somewhere.

BPRD THE BLACK FLAME TP
I had been reading the BPRD series as they came out, just like I do Hellboy (the book that spawned it), but they weren’t really sticking to my brain the way I would have liked. The Black Flame is the first one I decided to hold off on buying until it was collected, and I expect it’ll be a lot more enjoyable for me in one sitting...

ASTRO CITY SAMARITAN SPECIAL
Kurt Busiek does such a fantastic job telling Astro City stories in both multi-issue arcs and single issues. So do I mind an extra-sized special issue while the current ongoing story is on a break? No, I do not.

CLAW THE UNCONQUERED #1
I mentioned above my enjoyment of the Conan comic, which has extended almost equally to the Red Sonja comics. So I bought the Red Sonja/Claw miniseries (or at least the one issue out so far), and liked that just fine. Andy Smith’s art was great, and he’s going to be drawing this revival of Claw’s solo series. And it’s going to be written by Chuck Dixon, whose work I love--on the right character or book--and who wrote the first Conan comic story I can remember buying. So I’m going to give this a try.

CASANOVA #1
It’s a spy book with all the right influences (Steranko’s SHIELD, Diabolik, stuff like that), and it’s only $1.99. And the art looks nice. Worth trying at that price... (There's an interview with writer Matt Fraction about it here.)

GARGOYLES #1
While I drifted away from the cartoons after a while, I really enjoyed this show when it premiered, and am enjoying it all over again on DVD. If it wasn’t being written by the series creator, I probably wouldn’t be buying the comic. But it is, so I am. So there.

FLIGHT VOL 3 GN
The first two Flight books were great. No reason to expect anything less from this third one.

BLACK PLAGUE ONE SHOT
I’m buying this one for Joe Casey, who rarely disappoints with his own creations. We’ll see... (It’s only a one-shot, so not a big risk.)

CHIPS WILDE THE WILD ONE GN
It’s a graphic novel set in a period that interests me (the West in the ‘20s), by a veteran Western comics artist. I think it’s worth checking out.

RED SONJA MONSTER ISLAND ONE SHOT
I’ll admit, they probably had me at Red Sonja. But this one is written by classic Conan writer (and creator of the comics version of Red Sonja) Roy Thomas. Thomas was one of the key comics creators from my childhood, and it’s hard to pass up anything with his name on it these days. (It’s almost as hard to find anything with his name on it, for that matter...)

ADVENTURES OF RED SONJA VOL 2 SHE DEVIL WITH A SWORD TP
Roy Thomas again, this time joined by Frank Thorne as artist, in these reprints of Sonja’s 70s Marvel series. I enjoyed the stories in the first book just fine, although I would have enjoyed them better if they had been reproduced better. I’m taking a chance that this will show some improvement.

PHANTOM LAW OF THE JUNGLE GN
I’m not sure what this will turn out looking like (it’s made up of panels spread out across two pages, with the dialogue and captions printed in the margins, I think). But I like the Phantom, and with art by Paul Guinan in a style similar to his recent Heartbreakers book, it’ll be really pretty.

LOVE THE WAY YOU LOVE #1
I finally read Jamie Rich’s first novel, Cut My Hair, and enjoyed it much more than I expected. This new series deals with some of the peripheral characters from that novel, so I’m looking forward to seeing them again. Plus, it’s in my new favorite format, Oni’s little digest format. You get the thrill of a serialized story, but in pieces bigger and more substantial than the average comic book.

STRUGGLERS GN
A last minute addition. I’m getting it because I’ve heard great things about creator Tim Fish, it sounds like the sort of slice-of-life story I really enjoy, and the price isn’t too bad for what you get.

JUDGE DREDD COMPLETE CASE FILES VOL 4 TP
And these, I’ll just keep getting until they stop making them. Because I
Posted by Penelopecat at 7:29 AM No comments:
Email ThisBlogThis!Share to TwitterShare to FacebookShare to Pinterest

I'm a fan of the CD revivals of childhood favorite TV shows from Big Finish. I'm not a huge Dark Shadows fan, but I like the idea. I really liked the short-lived prime time revival series in the 90s, but find the original series a bit too slow and dull to actually sit and watch. But the idea of supernatural soap opera really appeals. (This is why I enjoyed NBC's Passions so much until I became too busy to watch it every day.) So this news is certainly of interest...

For those of you unfamiliar with Dark Shadows, it is a gothic drama TV series that was broadcast in the US from the mid-Sixties to early Seventies. It is the closest equivalent to an American Doctor Who in the sense that it attracted a dedicated pre-teen following on its original broadcast that has grown in to a massive, and very enthusiastic, cult following. The series has spawned many fanzines, newsletters, websites and conventions and it seems only natural that Big Finish should step in and continue the rich legacy on audio as it has with the likes of Doctor Who, The Tomorrow People and Sapphire and Steel. We feel certain that Dark Shadows fans and newcomers alike will enjoy this latest addition to the range of audio dramas available from Big Finish. "
Posted by Penelopecat at 11:13 PM No comments:
Email ThisBlogThis!Share to TwitterShare to FacebookShare to Pinterest
BBC America seems to currently be in the midst of trying to appeal to viewers with pulses. In addition to the shows in the article I mentioned a couple of weeks ago, they have some new stuff coming next week that I’m interested in.

First, in their “Mystery Monday” slot, they’re showing the third series of Sea of Souls, just a few weeks after its conclusion in the UK. Having seen the first two series on DVD, this has become a favorite of mine--doesn’t hurt that, starting with the second series, the cast featured Dawn Steele--and it’s nice to know I’ll get to see the third series right away. This series departs from the earlier format of three two-part stories over the six-episode series, instead telling six single-episode stories. I’ve read reviews that say the quality almost as good as the second series, so I’m excited.

It’s followed by something called Murder Prevention Unit, about which I know nothing, but I’ll check it out.

And on Tuesday, there’s the premiere of Rocket Man, a drama starring Robson Green. Again, read about this on the BBC UK site and it sounded like something I wanted to check out (been a fan of Green’s since Touching Evil). Now I can, without having to buy the DVDs.
Posted by Penelopecat at 10:02 AM No comments:
Email ThisBlogThis!Share to TwitterShare to FacebookShare to Pinterest

BBC America - Sea Of Souls: "Driving on a curvy road, you suddenly know what is around the bend -- and there it is, exactly as predicted. The phone rings and you know who is calling. Coincidence? A fluke? Or are these glimpses of powers beyond our knowledge? One man's truth is another man's hocus-pocus, and that is where Dr. Douglas Monaghan (Bill Paterson, Lie With Me) and his two researchers Justine McManus (Dawn Steele) and Craig Stevenson (Iain Robertson) come in. They make up the fictional Parapsychology Unit at Clyde University that is at the heart of the gripping drama Sea of Souls. 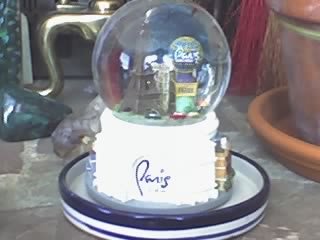 A little bit of home on my parents mantle.