Of all the comics that came out in April of 1981, I believe the only one I actually bought was Marvel Premiere 59, the third issue featuring Doctor Who. This one would have featured the first half of the City of the Damned storyline, which was one of the creepiest things I had read to that point. Written by John Wagner and drawn by Dave Gibbons, it's almost a Judge Dredd story starring Doctor Who.

I can't remember which issue of these reprints featured a pin-up of the Daleks and Davros by Dave Cockrum, but I do remember being very confused by it. At this point, I had neither seen nor read Genesis of the Daleks, so as far as I knew, the origin of the Daleks was exactly as I had read it in Doctor Who and the Daleks. The reference to Davros as the creator of the Daleks made no sense to me, since, as far as I knew, the Daleks had evolved, not been created. So, my pre-teen mind reconciled it by deciding that the picture of Davros was actually an illustration of what was inside a Dalek. Given how obsessed I later became with facts and continuity, I'm amazed that I accepted my own interpretation so easily. On the other hand, in those innocent, pre-Internet days, it's not as if I had a lot of avenues for research.

While I didn't buy it, I had to smile when I saw that Mike Mist's Minute Mist-eries came out this month. I know I had seen it on the racks, but may not have even picked it up. Given that its creators, Max Allan Collins and Terry Beatty, went on to create one of my favorite comics of all time, Ms Tree, it figures that this barely blipped on my radar when it came out. 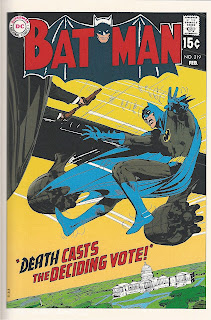 In Batman 219 by Frank Robbins, Irv Novick, and Dick Giordano, Bruce Wayne is still searching for support for his VIP crime victim's assistance program. He meets a senator working on an apparently groundbreaking anti-crime bill, and the two fly off to Washington. 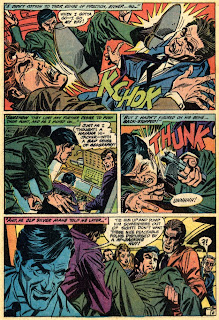 En route, the plane is hijacked by crooks trying to stop the anti-crime bill from passing. Bruce fights back, and is tied up in the plane's galley for his trouble. So now he needs to find a way to escape his bonds, disguise himself as Batman, and stop the hijackers, all without them discovering that Wayne is no longer a prisoner, in order to protect his secret identity. It should come as no surprise that he manages to do all that, stopping the hijackers and saving the senator.

Then, in the second story (because all that's not enough to fill an entire issue) by Mike Friedrich, Neal Adams, and Dick Giordano, Christmas has come to Gotham. Batman is ready to keep the streets safe, but Commissioner Gordon and the police manage to convince him that Christmas is one day the city can take care of itself. 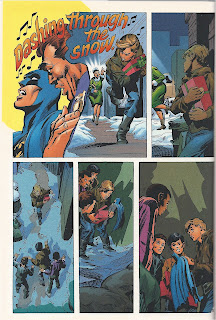 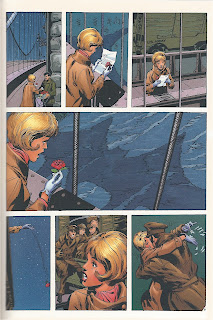 While Batman joins the police in singing Christmas carols, we see how Christmas is, indeed, a day crime and tragedy can't ruin in Gotham City. While he isn't out on the streets himself, Batman's image is everywhere, from action figures to charity workers dressed as Batman instead of Santa Claus. That image reminds Gotham citizens contemplating crime to stick to the straight and narrow, at least on this one day. It's sentimental, and a bit sappy, but it's a Christmas story.

In addition to those two stories, there's also a short sci-fi twist-ending story reprinted from an issue of Phantom Stranger.

And, in last month's Batman 6, written by Scott Snyder and illustrated by Greg Capullo and Jonathan Glapion, Batman spends 20 pages hitting a guy. And if I hadn't read the previous five issues, I would have no idea why. (Actually, I'm still not quite sure why.)

I don't want to say that the storytelling approach from 1970 is better than what we're seeing in 2012. But if the comics industry is confused as to why their audience is shrinking, and why casual readers aren't picking up their books, I present Exhibit A. 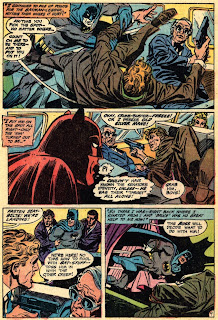 After the first O'Neil/Adams issue in Detective 395, the return to the Robbins/Novick team feels a bit like a throwback. It's unfortunate, as it's a perfectly serviceable story with some really nice artwork. Novick particularly excels at keeping the action interesting while contained within a confined space. And Robbins comes up with some clever, plausible methods for Batman and Bruce Wayne to appear to be two separate people.

However, when compared to the O'Neil/Adams work (even one as atypical as their first story together) the lead story in this issue just doesn't have the same energy. As good as Novick is, his layouts and camera angles aren't as unique and diverse as Adams. His characters are fine, but they just don't seem to move across the page in the same way.

It doesn't help that the reader doesn't have to compare Novick's work with their memories of Detective 395, because Neal Adams illustrates "The Silent Night of the Batman," this issue's Christmas story. And he does a great job, especially since this story (as the title implies) relies heavily on the visuals. Adams' characters truly come to life, telling their stories almost entirely through their body language and expressions. Juxtaposed with shots of Batman and the police singing Christmas carols, Adams packs a great deal of information into each page. (Not to ignore writer Mike Friedrich, who crafted a scenario that really lets Adams shine, as well as putting a very human face on Gotham City.)

To contemporary readers, more familiar with the Batman-as-Urban-Legend or Batman-as-Complete-Dick versions of the character, the sight of a Batman socializing with the police force (even singing along with them) while Gotham citizens purchase Batman action figures and dress up as the Caped Crusader will probably seem ridiculous. To those of us with souls, however, this version of Batman feels like a hero we can truly admire. He does the job he has set out to do, but he does it because he wants to protect the innocent, not punish the guilty.

This version of Batman is not worlds away from the original Bill Finger/Bob Kane version, either. In those stories from the 1940s, he joked with Robin, made wisecracks when fighting, and even sang in costume. While the Batman in this story is considerably more social, he's probably closer to the original than the current version of the character.

"Time to Kill," the sci-fi reprint written by pulp wordsmith Henry Kuttner, is a fun diversion, but to this 2012 reader, feels very much like one of a million twist-ending time travel paradox stories.

Interestingly, on the letters page, there's a letter singing the praises of Dick Giordano's inking. The author? One Klaus Janson, who, if memory serves, would become one of Giordano's assistants before making a name for himself as an inker, penciler and colorist, doing quite a bit of work on Batman himself.

While still in the early days of his Bronze Age revival, it's clear that Robbins and the other Batman writers are eager to get away from the camp image of the TV series. While not as stylish and weird as O'Neill and Adams' work, Robbins and Novick tell a story grounded in the real world of politics, crime and hijacking. Four stories in, and there's no colorful, costumed villains in sight. Batman is well on his way to reclaiming his roots.

Posted by Penelopecat at 10:00 AM No comments:
Email ThisBlogThis!Share to TwitterShare to FacebookShare to Pinterest
Newer Posts Older Posts Home
Subscribe to: Posts (Atom)