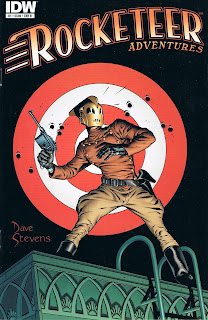 Some time ago, I blogged about how much I love Dave Stevens’ Rocketeer, and how I was looking forward to the then-upcoming IDW Rocketeer Adventures series with a mixture of excitement and sadness. Well, the first issue is out, and I’m going to talk about it today. So, consider this your spoiler warning.

As I said, I had bittersweet feelings about this miniseries. Until now, the Rocketeer had always been Dave Stevens’ character, with the exception of a short story by Peter David and Gray Morrow in Disney Adventures (which tied in to the movie, so that doesn’t really count). While only two stories appeared in print, Stevens had plans for many more that never saw the light of day. He passed away in 2008, so those stories will never be realized.

Part of me feels that if a character is so strongly identified with its creator, then maybe the character should die with him. Having said that, I love the two Rocketeer stories that we got, and I have always hungered for more. That means that either someone figures out how to draw comics with an Ouija board, or new Rocketeer stories are going to have to be done by artists other than Stevens.

I think I’m willing to accept Rocketeer stories by other artists, because Stevens was very willing to recruit help. The second story was co-written by Danny Bilson and Paul DiMeo, writers of the movie. Stevens also received plenty of help on the art, from the likes of Sandy Plunkett, Mike Kaluta, and Art Adams, among others.

He even says in his autobiography that because he was such a slow artist, he should have gotten other creators involved in the series earlier, with him supervising production. Who knows; maybe if that had happened, we’d have seen Rocketeer stories on a much more regular basis, and the character would be much better known with a larger body of work. On the other hand, maybe there wouldn’t be the same mystique if we had more than the relatively small number of much more personal pages that Stevens (with help) was able to produce.

At least IDW chose to produce an anthology book of big name creators contributing short stories about the character. This may just be a prelude to a regular series by a single creative team of not-so-big names, but taken on its own terms, it’s a good idea. These aren’t just creators churning out Rocketeer stories; they’re tributes to Dave Stevens, done with love and admiration. 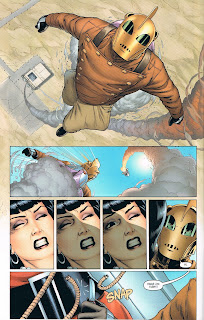 This first issue features three stories and two pinups. The first story, by John Cassaday, starts at the tail end of a Rocketeer adventure, with girlfriend Betty held hostage by gangsters and strapped to a rocket. A recap page sets the scene, telling us that Cliff had uncovered an extortion plot involving the rocket, and Betty was taken hostage to force him to back off. The actual story is mostly action, showing how Cliff rescues Betty and stops the gangsters.

John Cassaday is one of those artists who I wish drew more comics I want to read. I loved his work on Planetary, but have no interest in reading his X-Men comics. I’ve only read a couple examples of his writing, but he’s pretty much proven that he doesn’t actually need to work with a writer. He’s the perfect example of the sort of artist who, 15 years ago, could leave superhero comics behind and do his own creation. Now? He’s doing covers for Superman, I think.

His art resembles Dave Stevens’ clean, clear, classic style. It’s beautiful and subtle, detailed where it needs to be, but not at the expense of expression or storytelling. His characters are all individuals with their own personalities. Which, considering he’s drawing Cliff Secord and Betty in his own style, makes it all the more impressive that they are clearly the characters that Dave Stevens created. 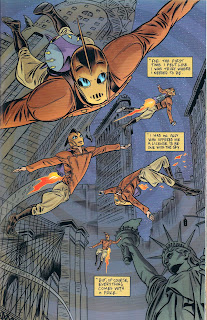 The second story, by Mike Allred, tells the aftermath of Cliff’s New York adventure (the last published Stevens story) and sets things up for the next stage of the character’s development. As a character piece, it carries a little more weight than the Cassaday one, and that makes it a little more jarring. Because it isn’t Stevens telling this story, it makes me that little bit sadder that he’s gone.

To be clear: the Allred story is very much in keeping with the tone of the original stories. But it’s also very much in Mike Allred’s artistic voice. As a story, it feels like a legitimate continuation, but artistically, it’s different. And that difference is what drives home the point that Rocketeer stories will never be just the way Stevens did them any more, because they can’t be.

On my first read, the Allred story felt a bit incomplete, as Cliff Secord told his friends he was off to start a new, vaguely-defined mission. Since the first two Stevens stories take place in 1938-39, and this follows from those, and the next story in the book takes place during WWII, it feels as if Allred is setting up a story that will probably never be followed up on.

Upon rereading the comic, it flows better. In the Stevens stories, Secord gets involved in his adventures for personal reasons. He’s not a proactive hero. The Allred story marks the transition from reactive to proactive. In the third story, we see the results of that, with the Rocketeer fighting Japanese super-powered foes during the war.

(In some ways, things would have flowed better if the book had led off with the Allred story. The Cassaday story is beautiful, but Cliff was never a crime-fighter by choice. Leading off with a story describing him as just that feels a little wrong, even though the rest of the story is very faithful to the original.) 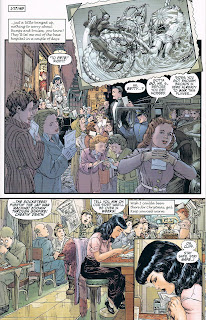 That third story is probably my personal favorite of the book, even though it’s the least like a traditional Rocketeer story (whatever that is). Written by Kurt Busiek and drawn by Michael Kaluta, it’s really Betty’s story, back on the homefront, only learning about Cliff’s adventures through his letters. We get snapshots (literally) of the Rocketeer on a couple of pages, but we see how Betty forces herself to stay strong, and true to her man, despite her fears that the worst may have happened overseas.

The Cliff/Betty relationship was so central to the original series. Stevens may never have had the chance to show them finally reuniting on the page, but it was clear from the ending of Cliff’s New York Adventure that their happy ending was inevitable. It’s great to finally see that reunion in Mike Allred’s story, but even better to see that their relationship endures in the Busiek/Kaluta story.

The two pinups, by Mike Mignola and Jim Silkie, are nice. The Mignola one makes me wish we could see a whole Rocketeer story by him. The Silkie pic is a pinup of Betty. Since Silkie has done tons of illustrations of Betty Page, this is really just another one, but it's still pretty.

Overall, I’m very pleased with IDW’s Rocketeer Adventures as a tribute to Dave Stevens and his creation. Whether I’ll really consider it a legitimate continuation of the character depends on how cohesive the series reads as a whole. Either way, the book is a definite success as far as I’m concerned.
Posted by Penelopecat at 2:47 PM No comments:
Email ThisBlogThis!Share to TwitterShare to FacebookShare to Pinterest
Newer Posts Older Posts Home
Subscribe to: Posts (Atom)