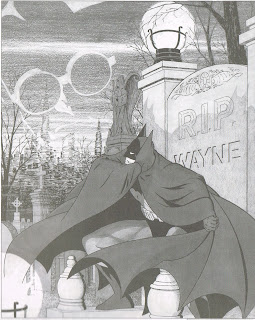 At WonderCon in San Francisco, DC Comics announced a series of comics called Retro-Active. The line features three comics each for Superman, Batman, Wonder Woman, the Flash, Green Lantern, and the Justice League. The comics pay homage to the way the characters were portrayed in the ‘70s, ‘80s, and ‘90s, done by creators who worked on them in those periods.

I’m excited, mostly, because the ‘70s and ‘80s is when I became a fan of those characters. The writers DC has chosen are the ones who made me a fan. Marv Wolfman is doing the ‘80s Superman comic. Gerry Conway is writing the ‘80s Justice League one. Dennis O’Neill, Roy Thomas, and Len Wein are writing a bunch. And, best of all, Mike W. Barr is writing the ‘80s Batman one.

Still, I’m only cautiously optimistic about this. If, for example, DC is going to these writers and asking them to just write the best self-contained Green Lantern or Wonder Woman story they can come up with, featuring the characters as they were in the ‘80s or ‘70s or whatever, that’s one thing. But if DC insists that it “feel like a ‘70s comic” by, I don’t know, sticking in lots of references to hippies and having characters say, “Groovy!” a whole lot, that’s going to ruin it for me. Even worse, if they insist on sticking in lots of continuity references, so fans can know exactly where to place their stories (as sounds like is the case with the ‘90s stories, at least), that also takes the fun out of it for me.

Similarly, I hope that the writers don’t try to force a lot of things into their writing that are viewed as stylistic hallmarks for the period. For example, ‘80s comics do feature more expository captions and thought balloons than comics today. That was the style then, and just because it isn’t the style now doesn’t make them any less well written, any more than Shakespeare is any less classic literature just because people don’t write in iambic pentameter these days. However, if these writers try to make themselves go over the top, it’s just going to feel silly.

Finally, the choice of artists is going to be a big deal. As great as it is to have Martin Pasko and Cary Bates doing ‘70s Superman and Justice League stories, the definitive artists of those books from that period (Curt Swan and Dick Dillin) are dead. So, sadly, are a lot of the other great artists from that period. Or, if they’re still living, they’ve retired. So while it’s exciting to me that Mike Barr is writing a new Batman story, featuring the version of the character that I love, I know it’s not going to be drawn by any of my favorite Batman artists from the same period. Not Jim Aparo (dead), Don Newton (dead), Marshall Rogers (dead), Gene Colan (retired) or Alan Davis (Marvel exclusive contract, I think).

In the end, though, it’s just hard to go home again. When I reread the comics I loved as a kid, part of the enjoyment I still feel comes from the context in which I first read them. In the same way, they are the products of the environment that produced them. They weren’t “‘70s or ‘80s comics” when they were written. They were just comics. Trying to produce a comic today that feels like it was written 30 or 40 years ago adds a layer of self-awareness that may work just fine, or may be just the ingredient it takes to ruin the experience for me.

Having said that, it’s new comics featuring my favorite characters by my favorite writers. So I am totally going to be buying them.

More exciting is the news that DC is going to be producing collections of Batman stories by my favorite artists. The first comes out this summer, collecting a number of Batman stories by Gene Colan. While he is perhaps best known for his Tomb of Dracula stories, I first encountered Colan’s art on Night Force, written by his Dracula writer, Marv Wolfman. (That’s scheduled to be reprinted later this year as well, and I’ll probably blog about it then, as it was a formative reading experience for me.)

When he took over drawing Batman, I became an even bigger fan. I didn’t realize it at the time, but his dynamic panel layouts and use of shadows and light may have impacted my tastes in comics art every bit as much as flashier, brighter artists like George Perez and Keith Giffen. The stories at the time actually treated Bruce Wayne and the supporting cast as characters as well, so the fact that Colan could draw ordinary human drama as well as superhero action was important. Definitely an artistic high point from my youth, and definitely a book I’m looking forward to. 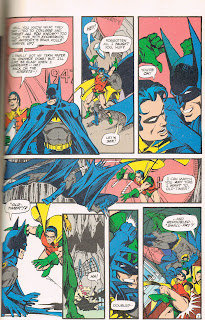 Steve Englehart and Marshall Rogers’ run on Batman appeared in the ‘70s, but I didn’t read it until it was reprinted in the ‘80s. And it instantly became another favorite. I was ecstatic when they returned to the character several years ago, and heartbroken when their proposed third and final part of the story wasn’t published. (And heartbroken all over again when Marshall Rogers passed away.) Once again, it was the perfect marriage of artist and character, with Steve Englehart’s down-to-earth characterizations giving a human heart to the fantastic adventures as icing on the cake. 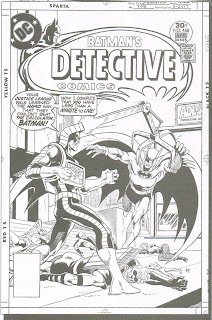 Having said that, Rogers did plenty of Batman stories without Englehart. In fact, years later, I learned that the very first actual Batman comic I read was actually the first issue that Rogers drew. And, as it happened, I hated it. Not because of the art, or even the story, but because it wasn’t the Batman I was expecting. I had become a fan watching the Adam West TV series (in reruns, I’m not that old). The actual Batman comic of the time was dark and serious, and that’s not what I wanted to read at the time.

I’ve no idea what this new Marshall Rogers collection will contain. Possibly both stories he did with Englehart, plus maybe the Legends of the Dark Knight story he did in the 90s, written by the late Archie Goodwin, completed by James Robinson. All that would be fine, and I’d love to have it all in one nice volume. But I’m also really hoping it has some of his earlier, uncollected stories. Especially that very first one, since that would be so perfect. 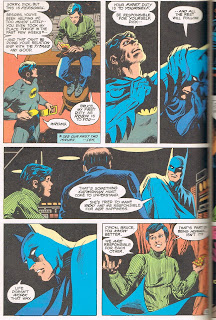 While Gene Colan and Marshall Rogers are fairly well known artists, I was particularly surprised (and very pleased) to learn of plans of a collection of Don Newton’s Batman stories. He’s nowhere near as well known as the other two, but he was the artist on Batman when I first started buying the comic regularly. He should have been better known only he died too young. Again, I have every intention of getting this book.

And if DC Comics were to collect all the Mike W. Barr/Alan Davis Detective Comics issues, and maybe start collecting Jim Aparo’s work on the character, I would never need to buy a new Batman comic again. Because I could just reread the stories that made me love the character in the first place, instead of reading new ones that make me wonder why.

Actually, that’s harsh; there’s nothing wrong with the Batman stories being published now. Except that they’re not the Batman stories that I want to read. I understand that styles change with the times, and that characters need to grow and evolve. But with corporate-owned characters like Batman, that growth and evolution is so artificial.

I keep banging the creator-owned comics drum, but when I read a creator-owned comic—even a superhero one—I know that any changes are at the wishes of the creator, and are as permanent as they want them to be. Jay Faerber can change everyone’s powers around in the pages of Dynamo 5, and as far as I know, that’s the status quo from then on. Eric Larsen can kill off the main character in Savage Dragon and replace him with his son, and for all I know, that’s the way it will continue to be.

What Grant Morrison and others are doing with Batman right now is probably interesting, but they’re not the kinds of Batman stories that made me a fan. I don’t want to read an in-depth exploration of his psyche; I want to see him and Robin stopping crazy crimes by the Joker and Penguin and Riddler. And any changes from that aren’t logical developments in the character by his creators, and there’s nothing to guarantee the next creative team won’t ignore them.

So I’m glad that the stories I do love are coming back in print, and I look forward to DC’s attempts to pay homage to those periods in the characters’ creative histories. No matter how it all turns out, it’s still a new Batman story by Mike W. Barr, and that’s something to get excited about.
Posted by Penelopecat at 4:55 PM No comments:
Email ThisBlogThis!Share to TwitterShare to FacebookShare to Pinterest
Newer Posts Older Posts Home
Subscribe to: Posts (Atom)