Looking at the comics cover-dated December 1981, the month seems notable more for stuff I didn't buy at the time. I don't think I bought any of these comics when they were initially released, but I either got them as back issues or reprints. So, the list of comics I wish I had bought as new in December, 1981 includes:

All-Star Squadron #4 Once I started reading All-Star Squadron, I was hooked, and collected everything back to the first issue. At this point, however, I probably thought it was just another superhero comic. Or hadn't even noticed it yet.

Amazing Spider-Man Annual #15 Actually, I've never actually read this. And possibly Frank Miller's name wouldn't have meant anything to me when this was published (although it might have, since he was writing and drawing Daredevil by this point). But it just seems to me that if I knew more about comics at that point, I wouldn't have let a Frank Miller-illustrated Spider-Man comic pass me by.

Nexus #1 Nexus would become one of my favorite comics, but it wasn't really on my radar until issue #3 came out with its flexi-disk read-along soundtrack. And it would be quite some time before this first issue was reprinted in an affordable format. So I didn't become a fan of Nexus, Mike Baron, or Steve Rude as early as I might have.

In fact, if I did buy any of these comics when they were released, it probably would have been Condorman #2. Because I was fascinated by the idea of a Disney movie about a superhero, and was super-excited about that movie. (I have it on DVD, but haven't watched it. Will it hold up to my memories? I'm almost afraid to find out.)

Posted with Blogsy
Posted by Penelopecat at 7:00 AM No comments:
Email ThisBlogThis!Share to TwitterShare to FacebookShare to Pinterest
Labels: 80s, comic books, newsstand 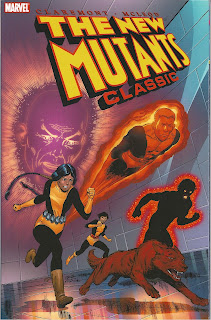 The last few days, I've been reading The New Mutants Classic volume 1, collecting the graphic novel and first seven issues of the X-Men spin-off comic from the early '80s. I've been on a bit of a Chris Claremont kick lately, probably because the current All-New X-Men and Uncanny X-Men comics, as well as the couple-years-old-now Wolverine and the X-Men feel much more influenced by his work than any X-Men series has in quite some time. I was a fan of Claremont's work back in the day, and I had a particular fondness for New Mutants, although I haven't read any of those issues since they originally came out. I'm pleased to say that they completely live up to my memories of them.

In today's comics market, where it appears to be a federal law that fully 1/3 of all Marvel Comics' output must be X-Men-related at any given moment, it's tough to recall that back in the early 1980s, there was only one X-Men comic: Uncanny X-Men. So, in 1982, when the fourth Marvel graphic novel introduced a new team at the Xavier School for Gifted Youngsters, it was a big deal. As a newly-minted X-Men fan, having been brought into the fold through the X-Men/New Teen Titans crossover, I was excited at the possibility of getting in on this story on the ground floor, so I eagerly snapped it up. 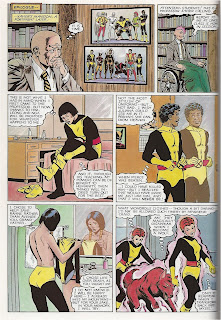 Claremont's story effectively introduces the new characters, giving them clear, distinct voices and personalities. As I read it today, I see that he drew quite a bit on X-Men history in using the members of the Hellfire Club as villains. At the time, I had no real idea who any of them were, but I don't recall that feeling like a problem. I understood that the X-Men had been around for a while, and that this stuff referred back to things I hadn't read. But I also must have felt like Claremont gave me enough information to cope.

The art on the graphic novel, by Bob McLeod, also holds up, I think. I now know that this was an early project for him, and that it was a bit of a rush job. I don't see that in the art at all. He does a great job with a story that features a lot of scenes of normal-looking people in normal environments, and that grounds the book in a reality that sets it a bit apart from Uncanny X-Men. Like Claremont, he creates characters who are distinct individuals, with specific looks and body types. The reader can tell who is who without having to rely on costumes or hair colors. It's a good introduction, and sets the tone for what is to follow. 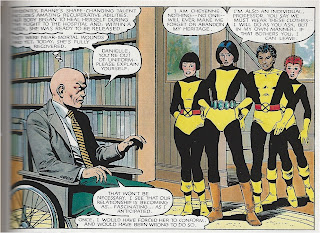 And what follows is particularly interesting for the direction it takes. Instead of simply looking at the success of X-Men and deciding to just do more of that, Marvel, Claremont, and the artists have created something related but distinct. It's a series about students in a school, learning how to use their powers. There's plenty of action, of course, but it's not because the characters seek it out. Instead, trouble finds them, through various avenues, and they end up having to defend themselves. 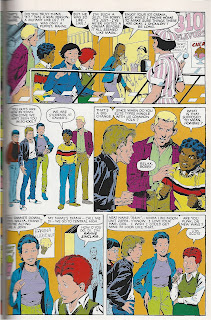 As a teen, I loved the X-Men and other superhero books because they allowed me to escape the humdrum day-to-day life I was living and imagine that I was sharing their fantastic adventures. But The New Mutants, like the best teen fiction, gave me characters and situations I could identify more closely with. I was the same age as these kids, and I was going to school just like them. It would be cool to be a member of the X-Men or the Avengers or the Justice League or even the New Teen Titans (who, despite the name, were mostly adults). But I could more easily imagine being one of the New Mutants, because they weren't so far from my own experience.

It's probably worth pointing out that the ratio of female to male characters on the team was three to two. This may have had some additional appeal for me. 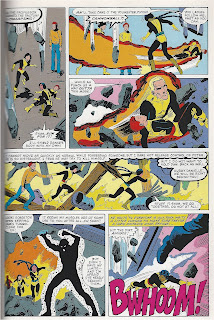 The art in this volume is good, thanks to the many hands involved. The first story, as I mentioned, is completely drawn by Bob McLeod, who had never drawn a monthly comic before. He pencils the first three regular issues, inked effectively by Mike Gustovich. Then we get an issue of Uncanny X-Men--containing plot developments important to the New Mutants story--drawn by one of my favorite artists, Paul Smith. After that, veteran Marvel artist Sal Buscema takes over layouts and pencils, inked (mostly) by Bob McLeod. So, the styles vary a bit over the course of the book, but the storytelling is solid throughout. 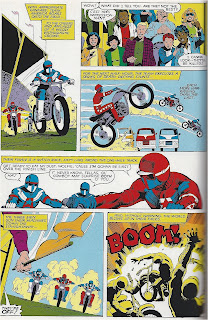 Weirdly, Marvel chose to launch a licensed series based on the motorcycle stunt toys Team America in the pages of the New Mutants, so they show up in the second half of the book. In the context of the story, they are integrated pretty well, but my own knowledge of their origins as a toy line causes me to raise an eyebrow. Still, overall, this book represents an effective introduction to a genuinely interesting spin-off from a hit series, and I'm looking forward to rereading the next several volumes.
Posted by Penelopecat at 5:17 PM No comments:
Email ThisBlogThis!Share to TwitterShare to FacebookShare to Pinterest
Labels: 80s, comics, marvel
Newer Posts Older Posts Home
Subscribe to: Posts (Atom)