Looking at the comics published (or at least cover-dated) March, 1981, I see plenty of familiar covers. I'm not completely sure I bought all these when they came out, but it feels like I bought them around this time. So I'll talk about them here.

Detective Comics 500 contains a number of stories that made a serious impression. Alan Brennert writes the lead story, a tale set in a parallel world, where "our" Batrman has a chance to prevent that world's Bruce Wayne from going through the tragedy that turned him into Batman. Unlike most "what-if" tales, I remember this one being warm and gentle, not focused on fan-wank references and spectacle. Between his comics work, his novels, and television scripts (particularly on the then-new Twilight Zone revival), Brennert has become one of my favorite writers, and this story is just one example why. Also, the art by Dick Giordano doesn't hurt at all.

But that lead story is just part of an amazing package, which includes a Slam Bradley story drawn by Jim Aparo, a Joe Kubert Hawkman story that ties into another classic DC character's origin, an Elongated Man story written by Mike W. Barr, and a Batman prose story written by Shadow creator Walter Gibson. Plus Deadman, and a story by Len Wein and Walt Simonson.

Perhaps best of all, this story is completely self-contained. I wasn't familiar with all the characters, but I didn't feel lost, or like I was trying to start reading a book with the last chapter. Great stuff. This should be reprinted in hardcover on its own.

This same month, Gold Key published Flash Gordon 31, with the first installment of the adaptation of the Sam Jones movie. While I can't say it's a great movie, I have a soft spot for it in my heart. I saw it with my brother, and the distinct look and feel of the film's design really made an impact on me. Last year, when I read the original Alex Raymond Flash Gordon Sunday strips for the first time (a Christmas present from my brother, ironically) I was surprised at how many of the film's set pieces were right out of the strip.

More importantly, in terms of my comics fanity, this was possibly the first Al Williamson story I remember reading. (Although, most likely, I had read his adaptation of The Empire Strikes Back by this point.) I didn't know anything about his long association with the character, and I certainly didn't know that he really had issues with illustrating this version, as described in the pages of Al Williamson's Flash Gordon. I just knew that the art was beautiful.

(To be honest, I don't think I read the story in this issue. I'm pretty sure I had a paperback collection that collected the whole movie. Whatever.)

And while I'm pretty sure that's all I would have bought in March of 1981, I have to smile when I see that Captain America 255 apparently came out that month. This issue, retelling Cap's origin, marks the end of a run by Roger Stern and John Byrne. I eventually became a huge fan of both creators, but a reprint of this story is the only issue of their Captain America run I've read. Just goes to show that no matter how long you collect comics, unless you started back in the 30s, you're always going to be too late to avoid missing some classics. 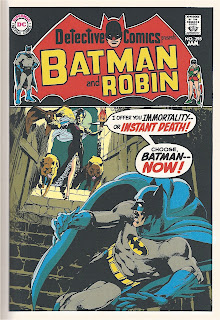 So far, the most interesting thing about reading the Bronze Age Batman comics chronologically is seeing things develop in context. For example, it's one thing to hear about how Detective Comics 395, "Night of the Waiting Graves," the first Batman story by Dennis O'Neil and Neal Adams marks a turning point for Batman as a comics series. It's another thing entirely to see how radically it transforms the series from the entertaining Frank Robbins-scripted whodunnits of the past couple of issues into something altogether different. 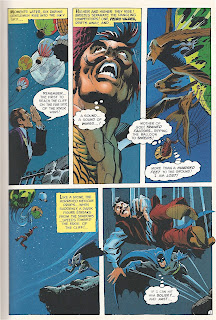 Considering that the O'Neil/Adams team is regarded as one of the definitive Batman creative teams, it's interesting that their first issue together feels very atypical. In a lot of ways, this story, with its overt supernatural elements, wouldn't feel too out of place in one of DC's horror books of the period. It's closer to a House of Mystery story than it is to the Batman stories that precede it. Batman is in an unfamiliar location (Mexico), taking on a mysterious, apparently immortal, couple who depend on a mystical flower for their immortality. However, the flower can also bring madness, and Batman is forced to battle the demons of his own psyche rather than a traditional villain like the Penguin or the Joker.

If I'm honest, I think the story succeeds more in terms of mood and tone than plot. The story rushes along, with very few explanations. The whole immortality-giving flower thing feels so isolated: it shows up in this story, and is gotten rid of by the end. 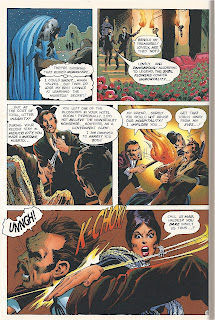 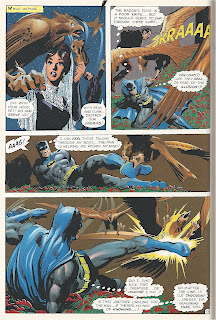 Neal Adams' art, on the other hand, is the real breakthrough. I had earlier proclaimed my enjoyment of Irv Novick's work on Batman, but Adams introduces a whole new energy in these pages. I don't have the art-school vocabulary to really explain what makes it work, and I don't want to fall back on the traditional phrases like "dynamic" or "realistic." (Although I think "realistic" really only applies when compared to the work of folks like Dick Sprang.) But compared to what came directly before, it does feel fresh, new and exciting.

The back of the book is taken up by the second half of the Robbins/Kane Robin solo story. I don't really have anything to add to what I said about the first part: it still has the feel of a writer struggling to appear contemporary and relevant without actually being part of the culture he's writing about. The story uses campus protests as the main part of the plot without appearing to understand the politics of those protests. 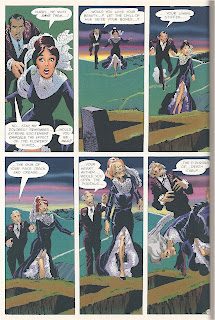 Robin story notwithstanding, this issue will always have its place in history as the first O'Neil/Adams Batman story. And while it may not represent the duo at the height of their powers, it's pretty good in its own right, regardless of its historical significance.
Posted by Penelopecat at 10:00 AM No comments:
Email ThisBlogThis!Share to TwitterShare to FacebookShare to Pinterest
Newer Posts Older Posts Home
Subscribe to: Posts (Atom)