Hospitals do indeed suck. But @ least this one has a nice view.

Posted by Penelopecat at 2:46 PM No comments:
Email ThisBlogThis!Share to TwitterShare to FacebookShare to Pinterest 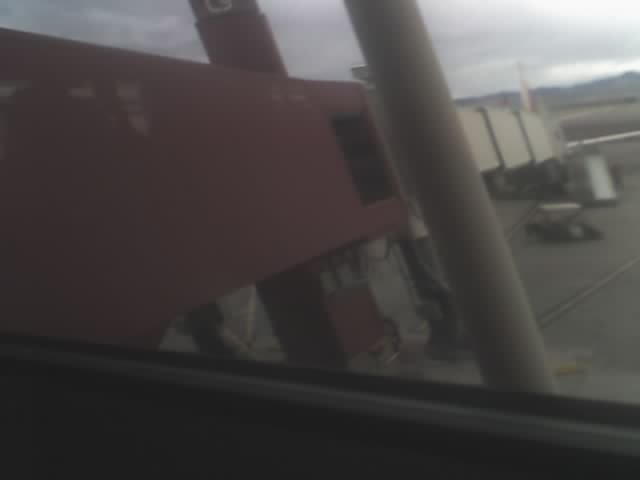 See the plane @ the end of the jetway? That means ill b flying 2day after all!

Posted by Penelopecat at 4:18 PM No comments:
Email ThisBlogThis!Share to TwitterShare to FacebookShare to Pinterest

It’s midseason, and the networks are springing new shows on us like there’s no tomorrow. These, of course, would be the shows that weren’t considered strong enough to handle fall competition, but enough money was spent that they get an airing anyway.

There’s two shows about thieves, Heist and Thief. Heist is pretty much the TV series version of Michael Mann’s Heat. If it was better, it would be Hustle, but it’s watchable. Thief, starring Andre Braugher on FX, is serious as a heart attack. But it’s only six episodes, so I’ll try to stick it out.

Also decided to sample a couple of new comedies. NBC has Teachers, which looked pretty atrocious in the commercials, but stars Sarah Alexander from Coupling, Green Wing, and Worst Week of My Life. And, indeed, it was atrocious, and did star Sarah Alexander, acting comedic circles around her costars. But between here and one scene that did make me laugh, it gets a second chance from me this Tuesday.

And last night, I recorded VH1’s So NoTORIous, Tori Spelling’s new sitcom about herself. And it’s not fantastic, but it was funny, particularly the second episode. So I’ll probably keep watching it.

(Really, all I ask from a sitcom is it makes me laugh. That’s all it takes, and so few still manage to do it.)
Posted by Penelopecat at 3:50 PM No comments:
Email ThisBlogThis!Share to TwitterShare to FacebookShare to Pinterest
So I’m trying to hire someone to trim my two trees (pine tree in front; palm in back) and clean up my very neglected back yard. So far, I’ve had two companies out to give me estimates. One estimated higher for the trees, the other would charge less for the trees, and more for the cleanup and weeding of the back. So, six of one, half a dozen of the other. The third company is supposed to come out tomorrow. It may come down to who has complaints filed against them with the license board, if any, or it may come down to me just picking a name out of the hat.

We’ll see.
Posted by Penelopecat at 3:37 PM No comments:
Email ThisBlogThis!Share to TwitterShare to FacebookShare to Pinterest
BBC NEWS | Entertainment | Robin Hood returns to British TV: "Legendary folk hero Robin Hood and his Merrie Men will return this autumn in an BBC One series, with newcomer Jonas Armstrong in the title role."

Really looking forward to this. It's already been announced that it'll be coming to BBC America, and if that channel is indeed contributing financing to the show, hopefully it won't be too long a wait.
Posted by Penelopecat at 3:26 PM No comments:
Email ThisBlogThis!Share to TwitterShare to FacebookShare to Pinterest
I watched last week’s episode of Smallville last night. It’s felt like a while since we’ve gotten new episodes, but frankly, I hadn’t really minded not having to watch it. Part of it is the fact that, after five years, nothing seems to have really changed or evolved on the show. (How many other shows could kill off a supposedly major character without a single ripple?) But part of it is just an increasing dissatisfaction with another aspect of the show.

A few episodes ago, we got a story dealing with Lois and Chloe being menaced by the spirit of a murdered girl out for revenge. It was a truly pedestrian episode, and could have come from almost any supernatural TV series: Buffy, Angel, Supernatural, Ghost Whisperer... Take your pick. But in talking to a friend about it, I realized that it really brought to the front a problem that, sadly, I had only been registering subconsciously.

So here’s the problem I currently have with Smallville, and I don’t know if it’s a problem that’s always exisited and I--shamefully--didn’t notice before, or if it’s been something that’s been growing over the past few seasons. But every woman on the show is either a victim or evil. And I recognize that, it being a show about Superman, almost every story is going to involve characters needing to be rescued by Clark Kent. I get that. But it’s not constantly ending up tied next to explosives that makes Lana a weak victiim character--although it certainly helps--it’s the fact that her character isn’t strong enough to tell Clark that she isn’t putting up with his crap any more and walking away. Chloe exists to pass on information to Clark and get tied up. Lois exists to tease about the future, and to get tied up and beaten.

And then I read in last month’s issue of SFX that Erica Durrance, who plays Lois, has a phobia of water. And last season, she was put in a death trap that involved a slowly flooding room gradually covering her with water and threatening to drown her. And this season, she fell in love with Aquaman, a storyline that required the actress to spend lots of time in the water.

And I read this, and I’m thinking the producers had to know of her phobia. And there was no particular reason for her to be the one Aquaman falls for and not, say, Chloe, since the characters are completely interchangeable. And this is complete conjecture on my part, but it almost sounds like the producers made he decision to put the actress in an uncomfortable position. And if that’s the case, and you combine it with what appears to be a mysogynist streak running through the storytelling, and it just leaves an increasingly bad taste in my mouth.

And I’m not quite to the point where I don’t want to watch the show, but it’s bothering me more now than it should.
Posted by Penelopecat at 10:13 AM No comments:
Email ThisBlogThis!Share to TwitterShare to FacebookShare to Pinterest

Woke up this morning, got out of bed, and discovered that it apparently took me an hour to get from the bedroom to the computer.

I hate Daylight Savings Time.
Posted by Penelopecat at 9:29 AM No comments:
Email ThisBlogThis!Share to TwitterShare to FacebookShare to Pinterest
Newer Posts Older Posts Home
Subscribe to: Posts (Atom)