Putfile - End of the Smurfs

Here's a clip from a UNICEF Belgium promo commercial for their Leave the Children in Peace campaign.
Posted by Penelopecat at 10:57 AM No comments:
Email ThisBlogThis!Share to TwitterShare to FacebookShare to Pinterest 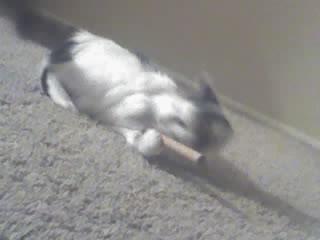 If only I could muster this much enthusiasm ...

Posted by Penelopecat at 7:12 PM No comments:
Email ThisBlogThis!Share to TwitterShare to FacebookShare to Pinterest
WARNING: MATURE(ish) CONTENT

So wrong. So very wrong. But seeing this sort of thing makes me feel like I lead a normal life.
Posted by Penelopecat at 2:09 PM No comments:
Email ThisBlogThis!Share to TwitterShare to FacebookShare to Pinterest
CBS scares up ratings with 'Ghost Whisperer' - Yahoo! News: "LOS ANGELES (Hollywood Reporter) - The new Jennifer Love Hewitt drama 'Ghost Whisperer' is settling into its own Friday
night groove and proving to be a self-starter for CBS so far
this season."

Evidence, then, that what America wants on a Friday night is feel good and large breasts.

And, to be honest, that's pretty much why I've been watching it.

And I finally gave up on Medium. I just turned on the DVR one day, saw how many recorded programs I had to watch, started watching that week's Medium, and realized that I really don't care much about these people or what happens to them. And just like that, I erased it, and took it off the list of programs to record.
Posted by Penelopecat at 8:39 AM No comments:
Email ThisBlogThis!Share to TwitterShare to FacebookShare to Pinterest

Have I linked to this before? 'Tis the only place I've found Berke Breathed's Opus online...
Posted by Penelopecat at 11:43 AM No comments:
Email ThisBlogThis!Share to TwitterShare to FacebookShare to Pinterest
This next post is all about comics. Just so you know. It's also written on the heels of several pints of beer, so bear with me. (Beer with me? This is what you're in for...)

Okay, so here's what I seem to be ordering from the new Previews, although it's not due until next week, so there may be changes...

Concrete Vol. 3: Fragile Creature from Dark Horse Comics
Do I love Concrete (the series)? Oh, yes, I do. So I'm happy to buy this new "complete Concrete" reprint series. (And, quite honestly, anyone who isn't all about loving Concrete doesn't deserve to be reading comics.)

Serenity from Dark Horse Comics
To be honest, this almost didn't make the cut. And then I saw Serenity, the movie, and loved it. And since this is actually cowritten by series creator Joss Whedon, I decided to stick it on the list. And it puts me over my monthly limit of graphic novels, but I was under last month, so that's okay. Basically, I'm not willing to say goodbye to these characters yet.

Star Wars: Purge One Shot from Dark Horse Comics
I love Star Wars, and it's been ages since I've actually bought a Star Wars comic. But this one picks up after the last movie, and it's only one issue (and if it had been more, I probably wouldn't have ordered it).

Hard Time Season Two from DC Comics
The sole survivor from last year's ill-fated "Focus" line. The problem with starting up a new imprint of comics is that it just confuses the audience. Particularly something like the Focus line; were they all a shared universe, did you have to read them all, were they superherores, were they Vertigo, were they something else? Fortunately, Steve Gerber's Hard Time, easily the best of the bunch, survived in this "season two" form. This weird teenager-in-prison-with-superpowers comic defies easy classification (although I obviously just tried) and just manages to be good. And, all things being equal, there ought to always be comics written by folks like Steve Gerber, Marv Wolfman, and Len Wein, whenever they want, because the mature comics market in the US probably wouldn't exist without them.

Showcase Presents Justice League from DC Comics
I just got the Green Lantern and Metamorpho Showcase books, and I'm all excited about 500 pages of great Silver Age comics for relatively cheap. If I haven't made it clear, my current attitude is that I don't want to read stuff that's like the stuff I used to love. No, I'd rather just reread the stuff I used to love. And my earliest exposure to the JLA was black and white reprints of the silver age stuff. Well, here's 500 more pages...

Tom Strong #36 from DC Comics
I had dropped the Tom Strong series, but this is the last issue, done by creators Alan Moore and Chris Sprouse. So I'll get this last one.

Blood River from Image
This is on the list, I must admit, because it's under ten dollars, and a one-shot, and co-written by Mike Oeming. I don't actually know what it's about, but it sounds dark slice-of-life-ish, and I end to like the projects he works on as a writer, as well as an artist. And the cover looks nice, sort of a woodcut-looking thing.

Coyote, Vol 2 from Image Comics
What I said about Gerber, Wolfman, and Wein above? That probably goes for Steve Englehart, too. And while his recent Batman: Dark Detective series was a bit disappointing, that doesn't mean I'm not looking forward to these reprints of what is probably his best work.

Image Comics Holiday Special 2005 from Image Comics
I like the idea of holiday comics, but this had better have all the stories it says it does (including a Liberty Meadows one) or I'm going to take someone out for a meal with Mr and Mrs. Pain, I am.
(Actually just reread the catalog entry, and it doesn't say anything about a Liberty Meadows story, but it does have work by a lot of people I like.)

Spider-Man Loves Mary Jane from Marvel Comics
I know what I've been saying lately: just because I like a particular creator, I'm not going to buy their second-rate superhero crap. (Yes, Greg Rucka and Judd Winick, I'm talking to you.) But those rules go out the window when it comes to Sean McKeever's Mary Jane stories. McKeever first came to my attention though his high school series, The Waiting Place. And while that was his baby and Mary Jane ought to be nothing more than company-owned crap, he and Takishi Miyazaki (probably getting that name wrong) have turned this book into something special.

Demo Collection Trade Paperback from AiT/PlanetLar
This is the only book I'm getting that reprints stuff I already have. But, as mentioned last month, I think, I've been rereading a lot of my Brian Wood books, and I want to have this all in one volume, for ease of rereading. (And that's why I'm going one book over my graphic novel limit this month.)

Mlinki Robot Bicycle from Slave Labor
Nothing really to say here, except that I liked the story he did in the second Flight book, so I want to read more. And it's cheap.

Red Sonja vs. Thulsa Doom from DE Press
Given their track record on the regular Red Sonja series, this will probably never even come out. But I like Red Sonja just fine, this is co-written by Peter David, who I generally like, and the art previewed in Red Sonja #2 looked nice. So I'm ordering it.

Fallen Angel from IDW
When I said directly above that I generally like Peter David, DC's Fallen Angel is the perfect example of why I like his comics... when they're his babies, and not corporate symbols. Well, DC's loss-through-cancellation is IDW's gain. The art looks absolutely gorgeous, and we already know that the story is fantastic. (Not going to elaborate on it here because, well, slightly drunk and tired.)

Living in Infamy from a new press whose name I can't recall...
This one, co-written by Ben Raab about supervillains in the witness protection program, almost didn't make the cut. I mean, I didn't feel like I really needed another superhero/supervillain book, even if it was creator owned. But here's the thing: I like Ben Raab's Phantom stories for Moonstone. And I like the Hawkman miniseries he did several years ago, illustrated by Michael Lark. But I hated his writing on Green Lantern, which I read when the book crossed over with Green Arrow, back when I was getting that. But in the back of my head, I could hear, "Jay Faerber," the writer who completely failed to impress me with his work on DC superheroes, but who completely won me over with his creator-owned stuff, including Noble Causes. So I'm giving Raab the same chance.

Scott Pilgrim Vol 3 Infinite Sadness from Oni Press
Not just a new book by Bryan Lee O'Malley, but the next Scott Pilgrim book. I'm not even sure how to describe it, sort of a mix between twentysomething slacker romance and Dragonball Z. Well deserving of all the acclaim it's been getting.

Judge Dredd: Complete Case Files Vol 1 from Rebellion
Okay, remember my griping about DC Comics when they dropped their line of 2000 AD reprint books, because I love those comics so much? (Especially the ones from the early years?) So you think I'm going to pass up the first-ever reprinting of Judge Dredd in chronological order from the very first strip?

Robo-Hunter: Play it Again, Sam from Rebellion
In recent issues of 2000 AD, they've been running a sequel/revival strip called Samantha Slade: Robo-Hunter. It's written by one of the original creators, Alan Grant, and drawn by original artist and personal fave, Ian Gibson. And I want to like it better, but it's not written all that well, and the art is lazy (Gibson, apparently feeling uninspired by the script, can't be bothered to draw backgrounds). But these original Robo-Hunter strips are the ones that made me look forward to the revival so much, and want to like it so much. And what have I been saying lately? I don't want to read something like something I used to love; I'd rather just read the original version again. (Although, in this case, I haven't read these specific stories.)

Oh, and there's a third Rebellion graphic novel this month, reprinting the recent John Wagner/Frazer Irving Judge Death stories. If I wasn't already over my limit, I'd be ordering that. But I am over the limit, and those are all stories I've read recently. (For similar reasons, I'm not ordering Grant Morrison's Vimanarama collection, either...)

Aaaaannnnndddd.... that's it, for now. But there are actually more comics ending this month than I'm adding, so it's possible I may end up adding the new Planet of the Apes miniseries that I'm sort of on the fence about.
Posted by Penelopecat at 12:04 AM 1 comment:
Email ThisBlogThis!Share to TwitterShare to FacebookShare to Pinterest
Newer Posts Older Posts Home
Subscribe to: Posts (Atom)