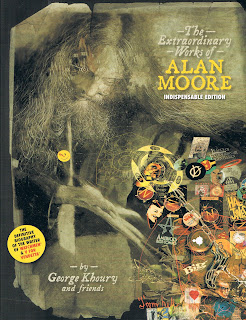 I don’t usually read the columns at ComicBookResources.com because, honestly, I find them kind of dull. But comments on other blogs drew my attention to comics writer Jason Aaron’s response to a recent interview with acclaimed creator Alan Moore. In it, Moore explains some of the more recent ways in which DC Comics has approached him about the rights to Watchmen, and the possibility of new comics about those characters by other creators. As part of the discussion, Moore says:

When Dave Gibbons phoned me up, he assured me that these prequels and sequels would be handled by ‘the industry’s top-flight talents’. Now, I don’t think that the contemporary industry actually has a ‘top-flight’ of talent. I don’t think it’s even got a middle-flight or a bottom-flight of talent. I mean, like I say, there may be people out there who would still be eager to have their name attached to WATCHMEN even if it was in terms of “Yes, these are the people who murdered WATCHMEN”. I don’t want to see that happen.

That’s just part of the discussion, and I recommend reading the whole interview to see it in context. I’m not entirely sure Jason Aaron has done that, because he has written a response. In it, he writes:

But I'll always remember 2010 for another reason.
It's the year I finally stopped giving a shit about Alan Moore.

He goes on to say:

Apparently it's my fault, as a modern-day comic creator, that poor Alan Moore continues to be so bedeviled by Marvel and DC. If I just didn't suck so bad, along with all my peers, then comic book companies wouldn't have to keep making Moore so miserable. To that I say...
Go fuck yourself, Alan Moore.
And also, goodbye.

Again, I recommend reading the whole thing, because I don’t want his comments to be taken out of context any more than he seems to have misread Moore’s comments.

For one thing, Moore isn’t singling out anyone, so to take the comments so personally is just silly. It reads like sour grapes. He doesn’t even blame other creators for his issues with the industry, except maybe Dave Gibbons for allowing himself to be used to send Moore messages from DC.

For another, if one reads the whole interview, it’s clear that Moore’s point is that top-flight talent shouldn’t be spending their time cannibalizing Moore’s work, they should be creating their own. This isn’t subtext; Moore says it right here:

At the end of the day, if they haven’t got any properties that are valuable enough, but they have got these ‘top-flight industry creators’ that are ready to produce these prequels and sequels to WATCHMEN, well this is probably a radical idea, but could they not get one of the ‘top-flight industry creators’ to come up with an idea of their own? Why are DC Comics trying to exploit a comic book that I wrote 25 years ago if they have got anything? Sure they ought to have had an equivalent idea since? I could ask about why Marvel Comics are churning out or planning to bring out my ancient MARVELMAN stories, which are even older, if they had a viable idea of their own in the quarter-century since I wrote those works.

And I agree with him. I mean, there are characters I grew up with whose adventures I want to see continue. (*Cough*DoctorWho*Cough*). But those are characters who were designed to be more important than their creators. When there’s a work that was designed to be self-contained by its creators (Watchmen, Sandman, Aaron’s own Scalped and Other Side), I don’t want to see them continued against the wishes of those creators by anyone else. And I can’t imagine any truly creative individual who would disagree with that.

Now, Jason Aaron has deservedly won acclaim for his own work like Other Side and Scalped. He also—possibly more lucratively—writes Marvel superhero comics like Wolverine and Ghost Rider and Captain America. I haven’t read Other Side, have only recently started reading (and really enjoying) Scalped, and have zero interest in reading his Marvel work. I’m sure it’s just fine, just not characters I’m interested in. 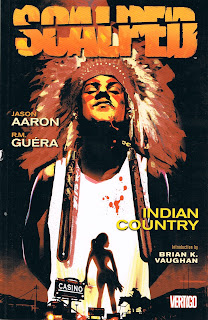 I do believe that he’s probably going to be remembered more for his own work for Vertigo than for his work on Marvel superheroes. (And, as has been pointed out in several places, DC’s Vertigo imprint probably wouldn’t exist if it weren’t for Alan Moore’s work at that company, including Watchmen.) In fact, when folks compile lists of the enduring works of comics literature, I suspect there will be very few Wolverine stories to be found.

And that’s the point that Moore is making: that if the comics industry needs to have people working on characters that are 25 or 30 or more years older to survive, there must not be very many people doing genuinely creative work now. And doing genuinely creative work is pretty much the definition of a top-flight creator. Don’t agree with Alan Moore? Fine, but probably the better way to prove him wrong is to go out and create the next Watchmen, as opposed to working on the same Watchmen.

And, really, if you no longer give a shit about Alan Moore, don’t write an essay about it. You know how much energy I put into writing about things I don’t care about? None at all.
Posted by Penelopecat at 4:00 PM 1 comment:
Email ThisBlogThis!Share to TwitterShare to FacebookShare to Pinterest
Just finished reading the new collection of Legion of Super-Heroes: The Great Darkness Saga, which collects the first issues of Paul Levitz's epic run on the comic (and coincidentally, the first issues I ever read.) Probably gonna blog about it on a more personal level soon, but in the meantime, here's the review I posted at Goodreads and Amazon.com about it:

Purely by coincidence, the first issues of the Legion of Super-Heroes I read as a kid were the first ones Paul Levitz wrote as he began his epic run on the book. The reasons I was hooked then are still the same reasons these stories deserve to be kept in print in this deluxe edition: they are fantastic super-hero stories. Working with artist Keith Giffen and others, Levitz crafted stories that still feel as fresh and exciting today as they did 25 years ago.

Levitz juggles a massive cast (25 regular characters, plus many more supporting players) and decades of continuity without ever making the reader feel confused or lost. He always gives the reader just enough information to follow the story, while making it clear that he is building on years of history, not ignoring them or dumbing anything down. He gives each character a distinctive voice, and shows them in situations that demonstrates who they are and what they can do. The stories are a bit more caption-heavy than is in vogue in modern comics, but otherwise, these could have been written today.

The story loses a little in the collecting, by not forcing the reader to wait a month between chapters, pacing out the reveals slowly. It still works fine as a single piece, not feeling overly episodic (which, by its nature, it is). By including not only the issues of the Great Darkness story proper, but also collecting the stories leading up to and out of the story, readers get a sense of how Levitz foreshadowed the big epic. We also get a clearer sense of how he weaved multiple stories in and out of the book, giving all the members of his huge cast a chance to shine.

Keith Giffen also shows incredible growth over the course of the series. His early issues show the kind of Buck Rogers/Flash Gordon future the book had previously used as a backdrop, which felt kind of dated. Once he finds his feet, however, he really transforms the setting into something that feels sleek and futuristic, even today. He never stops tweaking and redesigning things to make them feel fresh and new and genuinely different from 20th century superhero stories.

Between the Levitz/Giffen Legion and Wolfman/Perez New Teen Titans, I became a huge DC superhero fan. I loved the adventures, but what kept me coming back were the character stories. They grew and developed from issue to issue, and the stories became about much more than superheroes punching supervillains. I loved these stories just as much as I did the first time around, and I hope this is just the start to a comprehensive reprinting of Paul Levitz's Legion work.

Posted by Penelopecat at 10:40 AM No comments:
Email ThisBlogThis!Share to TwitterShare to FacebookShare to Pinterest
Newer Posts Older Posts Home
Subscribe to: Posts (Atom)