So I recently discovered a cool web site, Mike's Amazing World of Comics. It started as a database of all the DC Comics ever published, but once the creator completed that (he claims, and I'm certainly not going to check his work) he began adding other publishers.

One particularly cool feature is the "newsstand" feature, which allows users to sort the database by date of publication. Essentially, this shows all the comics which were on sale in any particular month. In my spare time, I started fiddling around with this, tracking back to when I remember first seriously collecting comics, and then going through month by month. The memories this has sparked have been interesting, reminding me of where I was at particular points in my life, watching my buying list grow and shrink and grow again as my tastes changed.

I thought it would be fun to write down those thoughts, so I'm going to try to cover a month's worth of comics each Wednesday (since Wednesday is new comics release day).

The first month I was able to find that I know I went into a comics store to buy a comic was December 1980. Before that, I had loved reading comics, but they weren't a regular habit. Whenever I went shopping with my parents, I would look at the comics in the grocery store or drug store or liquor store. I remember begging my parents to let me come along to Jay Vee Liquor in El Cerrito, not because they bought much liquor, but because that store had a bigger comics rack than any I had ever seen.

As a kid, my tastes ran to humor comics: Richie Rich and Casper and friends from Harvey Comics, Archie and his friends from Archie Comics, and a ton of Disney and other licensed cartoon comics from Gold Key. Also probably Super-Friends, which, along with the Adam West Batman TV series, was my introduction to the world of superheroes. At that age, though, actual superhero comics were too grown-up for me. I remember the first real Batman comic I ever read was Detective Comics 468, which I learned decades later, was Marshall Rogers' first time drawing a full-length Batman story. At the time, it was too adult and scary for me, though.

I also remember standing in line with my mother at the check-cashing window at Safeway one day, probably holding whatever comics I had chosen. An older kid offered me some comics he had already read and wanted to give away. I think one was a Conan comic, and another featured the Thing, from the Fantastic Four. One featured scantily-clad men and women with swords on the cover, the other featured monsters. Either way, they were too scary for me. I probably also checked out Marvel's Star Wars comics when I could find them, but, again, never made a concerted effort to try to get them with any regularity.

That changed, however, when one day in late 1980, I saw Marvel Premiere 57 displayed in the window of Comics & Comix on Telegraph Avenue in Berkeley, California. We had recently returned from a year-long stay in New Zealand, where I had become a rabid Doctor Who fan. So this sighting of an American comic featuring Doctor Who was a must-have.

I had no idea how frequently it came out, so I regularly phoned the store asking if it had come out yet. When it finally did, I can't remember if I had my mom drive me to the store, or asked my dad to pick it up after work (he worked nearby, at the university). Either way, I remember them being very supportive, helping me to get all four issues of Marvel Premiere featuring the Doctor. If only they knew what they were encouraging.

Looking through the rest of that month's releases, it doesn't look like I bought anything else at the time. I did end up buying some of that month's releases as back issues, like New Teen Titans 2. But that's a story I'll save for the month I discovered New Teen Titans, a little over a year later. Because even though I only bought the one comic back in December 1980, it was the start of a way of life for me.

Posted by Penelopecat at 10:00 AM No comments:
Email ThisBlogThis!Share to TwitterShare to FacebookShare to Pinterest
Labels: 80s, comics, newsstand 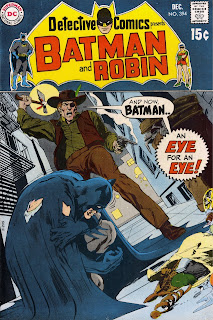 Picking up from the cliffhanger ending of Batman 217, Detective Comics 394 continues the story (loosely) of the Wayne Foundation's VIP program.

In a story written by Frank Robbins and drawn by Bob Brown and Joe Giella, Bruce Wayne finds himself confronted by a one-eyed Native American named "Dakota" Jones. Jones, a race car driver, accuses Wayne of having his car shot at during a recent race, so that Wayne's own driver could make his way to victory. This is, of course, absurd, so Batman and Jones investigate.

Unlike Batman 217, the mystery here is a bit overly complicated and Byzantine, and doesn't feel quite as natural. The idea that the shot was fired from a weapon concealed in the Wayne driver's car, triggered from the spectator stand with a remote control disguised as a transistor radio, is just a couple of layers too deep and complicated for what is essentially a gambling scam.

There's a lot more clunky dialogue in this issue, and a lot more of Bruce calling Alfred "Alf" or "Alfie." It's hard to tell how much of that stuff was a result of the Batman writers and editors trying to make a transition away from the camp tone of the Batman TV series, trying to sound "hip" and contemporary, and how much is just clumsy writing.

As one might imagine in a mainstream comic from 1969, the question of "Dakota" Jones' ethnicity isn't dealt with particularly sensitively. He's colored red, and there are a lot of references to pow-wows, peace pipes, and scalping. Having said that, at least Jones' heritage doesn't color every piece of dialogue or action he's involved with. The fact that he's Native American is actually fairly incidental. Since it's not important to the story, I'm not sure why Robbins made this choice. Maybe he was looking for a more exotic option than the usual bunch of white guys? Hard to say. 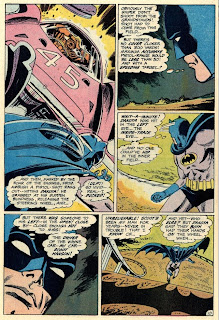 The art, by Brown and Giella, is fine as far as it goes, although it pales in comparison to the Novick/Giordano team on Batman 217. Brown's figures are just a little more stiff, and his action is just a little less dynamic. It's straightforward and serviceable, but not spectacular. And the fact that I know that the next issue is drawn by Neal Adams makes this issue seem that much less visually exciting. 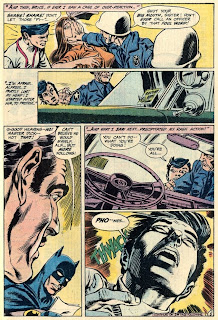 The book also features a Robin backup story, written by Robbins and drawn by Gil Kane and Murphy Anderson. Telling the story of Dick Grayson's first day at college, we get a view of campus protests that very much feels written by an old man trying to be relevant. The notion of campus protestors faking their arrests and brutality at the hands of the (fake) police isn't bad, but it's not great, either. And the execution feels very simplified, when a story based in any sort of political situation should have all the complexities that political stories bring.

Still, it's only the first part of a multi-part story. And the art, by Kane and Anderson, is gorgeous as always. So no complaints there.

Overall, in its first month, the Bronze Age Batman is still finding its way. The emphasis on Batman as a detective is very welcome. And, with the first Denny O'Neill/Neal Adams story right around the corner, it's only going to get better.