This past week was frustrating. News about the state of the world continues to depress me, work continues to be crazy and frustrating. Even being home isn’t perfect; as I type, some guy is riding his motorcycle up and down the street, revving it up as loud as he can. Must be a Christmas present.

So escaping into fiction was pretty essential. Here’s what I read this past week: 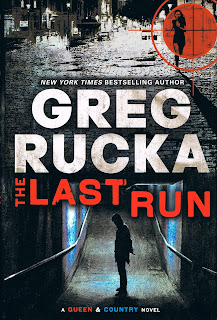 The Last Run by Greg Rucka

I became a fan of Greg Rucka through Whiteout, his first comic. From there, I went back and started reading his Atticus Kodiak novels, and enjoyed his Batman comics. And while his DC superhero comics have been entertaining, it should come as no surprise to my regular readers that I prefer the comics he’s created himself.

One of my favorite comics of the last ten years is Queen & Country, Rucka’s series about British secret agent Tara Chase. A few years ago, the comics series ended, but he continued Queen & Country as a series of prose novels. Like the comic, they’re gritty, violent, and very firmly based in the real world. They’re not James-Bond-with-Boobs stories full of larger-than-life escapades where the hero escapes unscathed after tossing off a few quips. They’re intense, down-to-earth, and nobody ever truly seems safe. Not even Tara Chase.

As usual with Rucka’s books, I found myself unable to put it down (which, considering I was reading it on my lunches and breaks at work, made for frustrating reading). At first, it seemed like a typical spy-mission-gone-wrong story—Tara is sent to Iran to help a Very Important Person defect, even though the whole thing smells like a trap to all concerned—but just when things reached their lowest point, Rucka springs a twist that turns the story completely on its head. Great stuff.

In a lot of ways, this feels like the final Tara Chase story, at least in the series' current format. I know Rucka has talked about bringing her back to comics, but the longer we go without a new issue, the less likely that seems. And honestly, if this is the last time we see Tara, I’ve got closure.

That’s one of the things I love about Rucka’s writing, and why I’d rather see him work on his own characters than company-owned superheroes. He isn’t afraid to follow his characters where their stories take them. The Atticus Kodiak series has become something completely different than the bodyguard mysteries it started out as, and like Queen & Country, seems to have reached its natural end point. If Ruck were to leave these characters where they are and start up new series (like his fantastic Stumptown comic series) or do more self-contained books (like A Fistful of Rain) I’d stick with him without question. 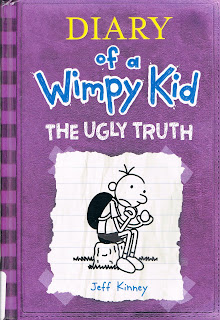 Diary of a Wimpy Kid: The Ugly Truth by Jeff Kinney

This is the fifth book in the popular children’s series that I always describe as “the adventures of Charlie Brown if he were a complete dick.” Once again, young Greg Heffley manages to be completely selfish and self-absorbed without the least bit of self-awareness. And, once again, the book is hilarious. It’s a delicate balance, but Kinney manages to make Greg funny without either humiliating him or letting him benefit at all from being a jerk. Plus the art is nice. 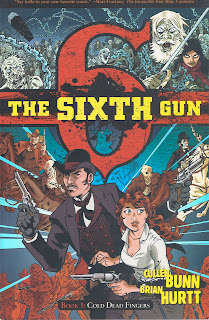 The Sixth Gun by Cullen Bunn and Brian Hurt

I love Weird Western stories, and I love ongoing comics that tell a single, ongoing story. So the idea of a monthly Weird Western comic was pretty much irresistible. Having said that, it took a few issues for this series to grow on me, but by the end of the first, six-issue story (collected in this volume), The Sixth Gun had become one of my new favorite comics.

Telling the story of six supernatural guns, the book focuses on Rebecca Moncrief, who inherits one of the guns from her father. The gun allows her to see visions of the past and the future, and is an important part of a mysterious plot by General Oleander Hume, the dead-and-resurrected former owner of the gun. Rebecca finds herself allied with Drake Sinclair, one of the general’s former subordinates, and together, they work to stop him from uniting the six guns, which would bring about dire consequences.

Writer Cullen Bunn tells a fairly complete story in this book, while setting up some intriguing mysteries for future installments. Artist Brian Hurt’s art is clear and straightforward, while still detailed. His characters are clear and distinct, and he makes the supernatural weirdness fit right in with the regular setting. The historical detail feels accurate without having to hit the reader over the head with it. All in all, loads of fun. Can’t wait to see where the story goes next. (As I type this, the comic is only up to seven issues, but the second story is already heading off in weird, different directions.) 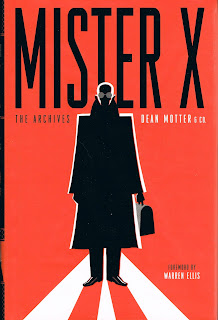 Like several books I talked about last week, Mister X was a childhood favorite that I am finally revisiting. I first heard about it in the pages of Amazing Heroes magazine, and was primed to love it as soon as it came out in the mid 80s. Fortunately, those early issues—featuring early work by Los Bros Hernandez—totally lived up to my expectations. And this book, collecting the whole first series of Mister X, including a new concluding story by his creator, Dean Motter, completely holds up.

Mister X tells the story of a mysterious character, bald, wearing dark glasses and a trench coat, haunting the streets and secret passageways of Radiant City. The city, a futuristic metropolis in the vein of, well, Fritz Lang’s Metropolis and other 30s and 40s vintage visions of the future, somehow seems to be driving its citizens mad. Mister X claims it is his job to fix things.

But why him? Who is Mister X? This becomes one of the central mysteries of the book, and while the question seems to be finally answered in the new conclusion found here, I think I need to reread it in order to fully process it. It’s all so screwy and twisty that when the answers finally come, they aren’t straightforward or easy. Which is fine; anything less wouldn’t have been satisfying.

When I was a kid, the comic didn’t really come out on anything resembling a regular schedule, so this is the first time I’ve been able to read the whole story at once. It’s every bit as enjoyable now as it was then. It’s weird, seeing the early work by the Hernandez’s here, as well as early work by Seth, who has grown so much between then and the work he’s doing in Palookaville these days.

Mister X is regarded as a seminal work, and I think it’s as much responsible for the way science fiction setting are done in comics as Blade Runner is for the movies. Certainly for me, Mister X was my introduction to sci fi noir (if not noir altogether). It’s tough for me to think of another story that blended imagery from the past with a complicated, contemporary story in quite the same way before this.

While this collects the first run of Mister X, it’s hardly the end for the character. He’s been brought back a couple of other times, and most—if not all—of those are going to be collected in a second Archives volume this year. Even better, Dean Motter has revived the series with Dark Horse Comics, basically restarting the continuity and giving readers a fresh place to begin. So far, he’s done one miniseries and several short stories, with a second miniseries coming this year, according to his web site.

The first new series managed to capture what made the series great, without the slight loss of focus that came with the erratic scheduling and changing of creative teams the original series suffered. I can’t wait for more, but I’m also happy to learn that the original holds up to multiple reads. All highly recommended.
Posted by Penelopecat at 5:03 PM No comments:
Email ThisBlogThis!Share to TwitterShare to FacebookShare to Pinterest
Newer Posts Older Posts Home
Subscribe to: Posts (Atom)