Continuing on through the journey through the early years of my comics collecting habit, here are the comics I remember purchasing in February, 1981, as seen on Mike's Amazing World of Comics:

(I know last week I talked about December, 1980; I don't think I actually bought anything that was on sale in January, 1981, at least not when it came out.)

Marvel Premiere 58 featuring Doctor Who. If memory serves, I still wasn't able to watch Doctor Who on TV at home, so these comics felt even closer to watching the show than reading the novelizations of the TV series. The stories, by Pat Mills and John Wagner (whose work I'd later come to love in the pages of 2000AD did a great job of combining the weirdness and humor of the series with larger-scale adventures (in four page weekly installments), and the art, by Dave Gibbons, was gorgeous. And the cover was by Frank Miller and Terry Austin!

And again, if memory serves, my purchasing this comic was the result of my calling the store every week to find out if it was out yet. And when it did come out, I either convinced my mom to drive me down to Telegraph Avenue, or convinced my dad to pick it up at the store after work. So thanks again, mom and dad, for helping me find this thing that I love.

Posted by Penelopecat at 10:00 AM No comments:
Email ThisBlogThis!Share to TwitterShare to FacebookShare to Pinterest
Labels: 80, comics, newsstand 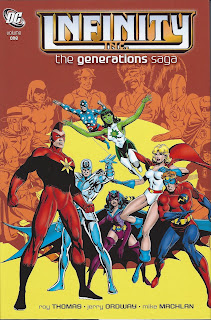 Presumably, DC's decision to revive the World's Finest comic book title, starring Earth 2 heroines Huntress and Power Girl--not to mention the creation of a series called Earth 2--is the motivation behind this first volume reprinting Roy & Dann Thomas, Jerry Ordway, and Mike Machlan's super-team series from the 1980s. Whatever the motivation, I'm fine; Infinity Inc, at least at the beginning, was a series I really enjoyed reading.

It was also a series I was really anticipating before it came out, thanks to Roy Thomas' decision to introduce the characters in the pages of All-Star Squadron, his series about DC's earliest superheroes in World War Two. After getting a taste of who the characters were, what they could do, and some hints at who they really were, I couldn't wait to read their full story in the pages of their own comic. It didn't hurt that All-Star Squadron had already made me a fan of Thomas and Ordway, and while I knew I'd miss Ordway on that book, I'd still be seeing his work.

(Sadly, that's not necessarily the case today. He still works in comics, but not nearly enough. And half the time, he's working on a book I have no interest in reading, and I'm past the days of buying a comic for the art alone. Fortunately, his latest work, a revival of DC's Challengers of the Unknown, written with DC publisher and OMAC writer Dan DiDio, is something I'm looking forward to.)

DC's selection of stories for this first volume clearly show how they perceive the intended audience for this book. This book starts with all the All-Star Squadron issues that feature Infinity Inc. However, those are the last three parts of a six (or more) part story, and there's no real introduction putting those stories in context for readers who may have never read the rest of the tale. This says to me that DC expects to sell this book to people who already read All-Star Squadron and Infinity Inc, and remember the original stories. The book seems intended for folks like me who want a nice bound copy of a childhood favorite, rather than a way to introduce new readers to a (perhaps forgotten) classic.

I only vaguely remember the first parts of the story from their original publication. Fortunately, these comics are from a period where stories weren't regularly collected into books. Thomas does a good job of bringing the reader up to speed within the context of the story, without being too obvious about it. I certainly didn't feel as if I were getting a complete story, but I didn't feel completely alienated by coming into the middle of one, either. (To be fair, I did read these stories on their original publication, but I haven't read them since. So it's not like I was being dropped into it cold.) 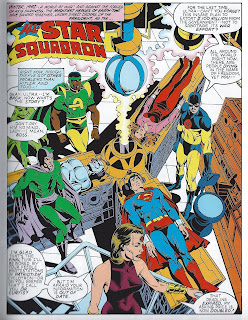 Jerry Ordway's art, ably inked by Mike Machlan, completely holds up. He has a clear, classic style that, while not as flashy as a George Perez or Jim Lee, works perfectly for these stories. In these All-Star Squadron chapters, he captures the feel of an earlier era, both in the designs of the characters and their technology. It doesn't feel like a pastiche of comics from that era, but it does feel more obviously influenced by classic illustration and storytelling than the aforementioned Perez or Lee.

Once the book gets into Infinity Inc. proper, the new kids take center stage, as expected. If memory serves, this series was the first extended, in-continuity examination of a second generation of superheroes, and that's the focus of the first four issues (all that's reprinted in this volume). However, Roy Thomas (assisted by co-plotter and wife Dann) maintains a balance of characterization and action.

Over the course of the first two issues, we meet the seven new characters that form the core of the new team, and are reintroduced to the present-day Justice Society of America. Interestingly, I don't believe the phrase "Earth-2" is mentioned anywhere in the first issue; presumably, All-Star Squadron and the annual JLA/JSA team-ups had raised the profile of the JSA and Earth-2 in the minds of readers enough that DC/Roy Thomas didn't feel it was necessary. Of course, this taking-for-granted that the readers understood the DC Multiverse may be what led to the perceived need for simplification which resulted in the Crisis on Infinite Earths series. (Also of course, I may have missed a reference to Earth-2 in that first issue, and be full of beans.)

We learn the backstories of all the Infinitors-to-be, to a greater or lesser degree. While some, like Lyta Trevor, had appeared previously, the readers is given all the information they need right away. Which isn't to say that there isn't stuff left open for future exploration, particularly the mystery of Jade and Obsidian's mother. They're also joined by existing characters Huntress and Power Girl (themselves second-generation heroes) and the Star-Spangled Kid (a first-generation hero, but due to time-traveling shenanigans, still a young man among a group of heroes in their 50s and 60s).

The first meeting of the JSA and their kids in costume features the unfortunate cliche of heroes fighting each other due to a misunderstanding. This, coupled with Hawkman's very negative reaction to his son's plans, makes the initial characterization feel a bit broad. However, as I said, this is the first time (I believe) that the generational dynamic was really played out on the comic book page. Huntress and Robin didn't have to deal with Batman's feelings on the subject, because on Earth-2, he was already dead. Power Girl wasn't Superman's daughter, so the relationship was different. And otherwise, the generational thing had only been dealt with in imaginary stories. 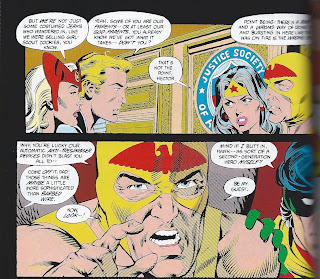 In 2012, older heroes being replaced by younger characters is almost a staple of comics, for better or for worse. In 1984, Roy Thomas was exploring new territory, and I think he handled it well. It makes sense that a parent in a dangerous profession wouldn't want their children to follow in their footsteps. It makes as much sense that the children would be drawn in by the glamour of superheroics, as well as seeing it as just a normal part of life.

In addition to the family drama, Thomas gives us plenty of superheroic action. They fight the JSA (sigh), they fight a bunch of bigots in a fast food restaurant, and they fight Golden Age staple Solomon Grundy in an abandoned movie studio. The mix of larger-than-life superheroic action and more down-to-earth stuff feels reminiscent of The New Teen Titans and other young supergroup comics of the time. 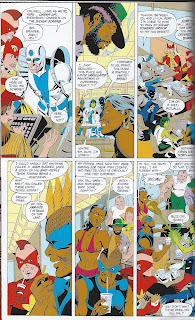 The art, by Ordway and Machlan, continues to build on the quality they demonstrated in All-Star Squadron. In particular, they actually draw the JSA members as if they were in their 50s and 60s. Previously, their age was almost always indicated by some graying at the temples. Ordway and Machlan give their faces the lines and slightly sunken look that comes with age.

They also do a great job designing Infinity Inc, although some designs (Jade, Obsidian, Fury) have aged better than others (Nuklon's mohawk). I've read that Ordway did the pages at a larger size than he was used to, and worked harder at the characters' "acting," working with their facial expressions and body language. He does give each character a distinct look and feel, aided by Machlan's faithful inking. The two make a great team. 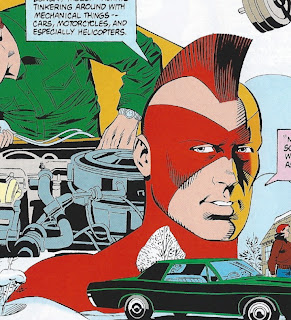 Interestingly, the original plan was for Machlan to pencil and Ordway to ink this book. Since Ordway has such a distinctive inking style, he still would have exerted a heavy influence on the look of the book, but it would be interesting to see how things would have turned out in a parallel world, where they didn't decide to switch roles. (It's been a long time since I've looked at anything penciled by Machlan, so it's hard for me to picture it.)

It's tough for me to identify Ordway and Machlan's influences, but they seem to be more classical illustrators along the lines of Alex Raymond and Hal Foster, along with guys like Al Williamson and Wally Wood. It's a style that I particularly like, and not one that seems all that evident in today's comics. So whenever Ordway does something new, it always gets my attention. (Even if I don't always buy it.)

For longtime fans of Infinity Inc, this book is a great opportunity to revisit the characters and stories. They completely lived up to my fond memories. For readers who aren't as familiar with the tropes and styles of early 80s comics, the writing isn't going to feel like a contemporary style. (Neither do Shakespeare, Dickens, or Jane Austen; doesn't make them any less classic). If I'm honest, the book is a bit pricy, and collectors can probably find the original issues much cheaper. It's a niche publication, and I'm just happy to have it on my bookshelf, so it was worth the money to me. Looking forward to volume 2!