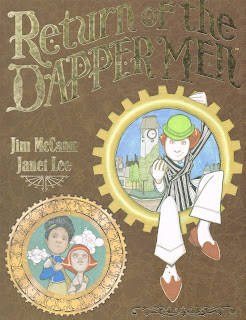 As we approach the end of the year, I can confidently say that my favorite graphic novel of 2010 is Return of the Dapper Men by Jim McCann and Janet Lee. It’s a tale of a mysterious world, Anorev, where, one day, time just stopped. There are no adults, and the children all live underground, in a world part cavern and part clockwork. Robots tend the houses and towns of the surface world. A friendship between Ayden, a human boy, and Zoe, a robot girl, is the only real connection between the two. Then, one day, 314 well-dressed men descend from the sky. They not only have deep connections to the creation of Anorev, but also its future.

My love of science fiction and fantasy didn’t start with adolescent viewings of Star Wars. It probably started with Laurent de Brunhoff’s Babar Visits Another Planet, further nurtured by L. Frank Baum’s Oz books and Johnny Gruelle’s Raggedy Ann and Andy adventures. I loved those stories that were magical road trips, where characters would encounter all manner of weirdness without any sort of logical explanation. Characters would encounter towns inhabited by china dolls or trees that grow complete lunchboxes full of food (plus napkins) or creatures who happen to have wheels for hands and feet.

I love the detailed, well-thought-out worlds of Harry Potter, the Imaginarium Geographica, and other contemporary fantasies, but I also miss those sorts of anything-goes, whimsical tales of my youth. And while I can reread the books I used to love, I hadn’t really found anything new that made me feel the same way. That is, not until I read Tony DiTerlizzi’s Search for WondLa and Return of the Dapper Men.

Return of the Dapper Men is (with reservations) an all-ages story in the best sense. It feels a bit like a fairy tale. McCann’s narrative voice and dialogue have a classic, naturalistic feel, which almost demands to be read out loud. His characters are vivid and distinct. The story can be read on several levels, which helps the all-ages appeal. On the surface, it’s a straightforward story about two friends trying to restore their world. There’s also a lot of hints about the true history of the world and its origins that aren’t so clearly spelled out. It’s a book that requires some effort on the part of the reader to put the pieces together, and definitely benefits from multiple readings. And its got a great message about the nature of progress and stagnation, but doesn’t spell it out like the moral of in one of Aesop’s fables.

In fact, it’s the underlying complexity that keeps me from wholeheartedly recommending it entirely for all ages. I’m not sure if enough is explained clearly enough to satisfy younger readers. But that’s me, reading it from an adult perspective, so it’s hard for me to judge. 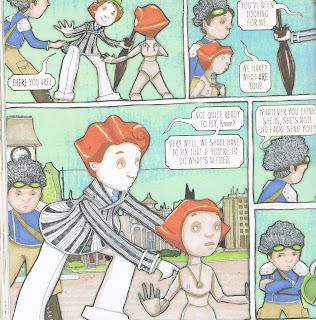 The art, by Janet Lee, is equally multileveled and beautiful. As a fine artist, she brings influences to her work beyond traditional comics. As a first-time comic artist, she tells the story clearly and beautifully. Since so much of the story relies completely on her visuals, it’s important that she is clear without being too obvious, and she rises to the challenge admirably. The book shares its look with classic children’s illustration, and I can’t think of anything else to really compare it to.

Despite the title, this is the first appearance of the Dapper Men. If all goes according to plan, however, it won’t be the last. This is (hopefully) just the first in a trilogy, and I look forward to the rest of the series. McCann also writes superhero comics for Marvel. I’ve read a couple, and they seem to be just fine. They’re even about characters (Hawkeye, Mockingbird, Alpha Flight) that I loved as a kid. Ironically, though, as an adult, I don’t enjoy Marvel comics the same as I did as a kid (more on that in a future blog entry.) So I’m glad that McCann also has the Dapper Men, to entertain me as an adult by reminding me of the things I loved as a kid, without simply copying them.
Posted by Penelopecat at 1:18 PM No comments:
Email ThisBlogThis!Share to TwitterShare to FacebookShare to Pinterest
Newer Posts Older Posts Home
Subscribe to: Posts (Atom)